Share All sharing options for: Bar Fights, Mullets and Monster Trucks: The Legacy of Road House

Re-posted in honor of the passing of Patrick Swayze, aka Dalton... 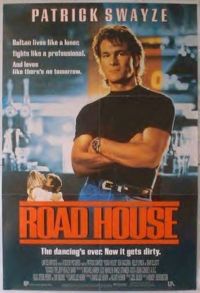 The year was 1989. Communism was in its last throes and the decade of the 80s, a decade most notable for Miami Vice, Mr. T., Reaganomics, and ending the Disco era, was winding down. Out of this darkness came beacon for American pop culture. Out of the neon, the pastel colors, and the Topsiders came Road House.

Road House isn't just a movie about a guy kicking the crap out of a bunch of henchmen at a bar in a small town in Missouri ....okay, it is about that. But it's also so much more. Road House is mullets of various shapes and sizes. Road House is advanced martial arts showcased in a environment of beer cans and pool tables. Road House is using a Bigfoot in order to destroy a local car dealership. And finally, Road House is a philosophical journey into our inner soul.

Cooler: A security supervisor, or "head bouncer". Typically, a cooler will have a tremendous amount of experience in the business and possesses superior conflict resolution skills. Holding an advanced degree in Philosophy is also considered a plus, although not required.

Bigfoot: In Road House, one of primary modes of transportation for Brad Wesley's henchmen is a Bigfoot. Bigfoot is universally regarded as the definition of a Monster Truck. While many would find this mode of transportation ludicrous in today's world of $3.85 a gallon gasoline, back in the 80s, when gas was around $1.00 a gallon, driving a Bigfoot to work was as common as people today driving a Honda Accord.

It is widely, and incorrectly, believed that no Eagle Premiers made it through the 1990s unscathed. I can personally attest that this urban legend is patently false. As recently as 2006, a dark blue 1988 Eagle Premier was seen in the North Seattle area. Various parts of the vehicle were held together with duck tape, and rolling down the window on the passenger side was considered an irreversible act, but the car still ran and was a living tribute to the glory of Road House henchmen transportation.

Chicken Wire: While the definition of 'chicken wire' seems straight forward (it's used to keep in chickens, right?), in the world of Road House nothing is as it seems. At the Double Deuce, chicken wire was the primary instrument utilized in order to protect Jeff Healy and his band from beer bottles, cans, chairs, tables, pool cues, automotive parts, small children, and any other objects that the patrons decided to throw at them. However, due to the fact that chicken wire was designed to restrain chickens, and not items such as shards of glass, it proves to be a fairly useless deterrent.

Memphis: Killing a man by ripping his throat out with your bare hands.

Whenchmen: Brad Wesley's Henchmen. Other commentators have referred to these guys as 'goons'. A 'Goon' is a guy sent into a hockey game to separate the head of the other team's star player from his body. Whenchmen do the dirty work for their boss in small Midwestern towns.

Before I get to the Top 10 lines from Road House I'd like to clear up a common misconception. There are reports circulating around the Internet that Dalton's first name is 'James'. This rumor, in my opinion, is completely unconfirmed and should be considered pure speculation at best. At no point in the film is Dalton referred to as anything other than Dalton. We are never privy to a shot of his Drivers License, nor to the personal medical reports that he hands to Dr. Elizabeth Clay, therefore, confirmation of this myth has never occurred. I'm not saying that Dalton's first name couldn't be James, I just have never seen any evidence that supports that notion.

10. Various Characters to Dalton - "I thought you'd be bigger?"

Road House fans might believe that this quote should be higher up on the list but I find that its rightful place is at the bottom of the Top 10. It must be included but it doesn't deserve to be ranked anything higher than tenth.

As it turns out, Wade Garrett isn't too far away from gettin' a whole lotta sleep.

8. Brad Wesley - "Christ, J.C. Penny is coming here because of me. Ask anybody, they'll tell you the same thing!"

Brad Wesley isn't so different from Dalton, after all, he came up in a rough neighborhood on the streets of Chicago. After serving his country in Korea he decided to settle in the quiet hamlet of Jasper, Missouri, population 1,011. Once in Jasper, Brad finally realized his destiny, or calling, if you will: 'Gather unto me what is mine.' It's not just a catchy phrase to Brad Wesley, it's a way of life. And it becomes Wesley's modus operandi, the driving force behind his desire to get rich off the people of this small Midwestern town.

Dalton's confrontation with Wesley at his lakeside abode gives us our first peak into the soul of this man of Jasper. Dalton accuses Wesley of "getting rich off of this town". Wesley makes no bones about it, "and I'm gonna get richer!" But Brad also has a civic minded side to him, one that becomes quite apparent when he runs through the laundry list of improvements that he has brought forth to this rural community. The list is long and distinguished: the 7-11, the Photomat, and most importantly an institution that completes any town, a J.C. Penny. So while we see Brad Wesley as a money grubbing crime lord, and a leader of a rough and tumble group of Whenchmen, we also see another side of the man. A side that is willing to give back to the community by facilitating the arrival of a national retail store that will offer the town folk a fine line of clothes, electronics, and house wares, and all at reasonable and sensible prices.

There is a philosophy known as lowered expectations. The basic premise of this line of thinking is that by setting small, easily attainable goals, one can be convinced of success in a quicker time frame.

Dalton and Tilghman define "success" in very different terms. Dalton views the job done when the trash has been taken out. Tilghman is happy if he isn't sweeping eyeballs up after last call. Dalton digs deep into his vast Cooling experience and reminds Tilghman that "it'll get worse before it gets better"; a night where nobody dies is not the measure of success. Indeed, it does get worse. Much worse. /Road_House_1989_000.jpg" id="BLOGGER_PHOTO_ID_5202991508320776210" border="0" alt="" style="float: left; margin: 0 10px 10px 0; cursor: pointer; cursor: hand;" />Dalton's not averse to the ladies. On the contrary, his longtime friend Wade informs us that Dalton got into a little "scrap" back in Memphis after becoming involved with a married woman. So he's no stranger to strained romances. But Denise is a different story altogether as she's the main squeeze of one Brad Wesley.

If you take one thing away from Road House it should be this: Dalton is an incredibly perceptive guy. I mean, he's got a degree in philosophy from NYU, they don't hand those things out on the street corner, for Christ sakes! Living by the mantra that 'preparation is the key to success', Dalton is never caught off guard due to his phenomenal ability to "expect the unexpected." This is true with both Whenchmen and members of the opposite sex. Dalton immediately smells the scent of peril with respect to Denise and quickly implements tactics in order to ensure that he does not fall prey to her 'charms'. His solution: NEVER look her in the eye! Well, maybe 'never' is an extreme term.

Who says a philosophy degree is useless?

5. Dalton to Doc Clay (aka - the woman wearing a picnic tablecloth as a dress) - "Nobody ever wins a fight."

Dalton has the unique ability to cut through all the B.S. and give it to ya straight. Doc Clay, after reading Dalton's personal medical history, becomes keenly aware of the vast array of cuts, breaks and bruises that the Cooler has suffered over the years. She comes to the logical conclusion that given Dalton's history of 31 broken bones, 9 stab wounds, 4 stainless steel screws, and two bullet holes, that Dalton isn't too good at successfully completing a bar room brawl in his favor. Dalton, however, points out the absurdity of fighting in the first place. Which makes you wonder: if Dalton is so aware that nobody wins a fight shouldn't he avoid the fight and the 31 broken bones, 9 stab wounds, 4 stainless screws, and 2 bullet holes that come with it? I'm just saying.

Perhaps that philosophy degree is useless.

Dalton's slowly but surely getting the Double Deuce into a workable condition. The chicken wire in front of the stage has been taken down, the bouncers have new uniforms, Carrie Anne is living out her dreams by singing with the band in between serving drinks, and the clothes of the customers have improved by a factor of ten. Looks like the job is almost done, right? Wrong!

Brad Wesley, due to a variety of self-serving and perverted reasons, does not want this bar to be a success in any shape or form. And he's prepared to send any and all Whenchmen at his disposal to the Double Deuce in order to thwart Dalton and Tilghman's plans. On this night, Wesley sends in a trio of particularly adept Whenchmen into the bar, including one who has modified the toe of his right cowboy boot to include a deadly blade. Brilliant!

At Dalton's introductory class entitled, "Bouncing and Cooling 101", Steve makes a cardinal mistake that has been repeated by law students everywhere since the beginning of time; he asks a stupid question.

There are no stupid questions, just stupid people that ask questions.

Wade Garret's time at the top of the mountain is slowly coming to a close. He's been considered the best Cooler in the business for a long, long time, but like all humans, time and age is catching up to him. His knees are a little stiffer when he gets done with a long ride on his Harley and his hair is now prominently infiltrated with gray. In short, Wade has reached the twilight years of Cooling.

Whatever we think of the aging Wade, we should not be so eager to completely close to book on his dominance in the field of Cooling. On Wade's first day in the town of Jasper he decides to stop by and visit his protege at the Double Deuce. When he arrives he finds Dalton out back where he is being roughed up by the same Whenchmen that have been a thorn in his side all movie long. Wade tries to peacefully enter the proceedings when he is informed by Morgan that a) he should mind his own business, and b) he's old.

Following this insult of Wade's Cooling prowess, he proceeds to kick ass on the assortment of Whenchmen, thereby thrusting himself right into the middle of the Dalton-Wesley war. This has dire consequences for Wade in the near future.

This line isn't just one of the best in Road House, it is truly one of the more thought provoking, blow your mind pieces of philosophy that has ever been uttered in the history of the American cinema.

Wesley - "I see you found my trophy room, Dalton. The only thing missing...is your ass."

Dalton - "I don't fly. [snips his suture] Too dangerous."

Red - "I got married to an ugly woman. Don't ever do that, it just takes the energy right out of you. She left me, though. Found somebody even uglier than she was."