Curlin Comes Up Short in the Man o'War

Share All sharing options for: Curlin Comes Up Short in the Man o'War 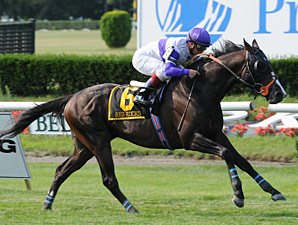 Making the switch from dirt to grass is a big change for any horse, even a Horse of the Year like Curlin. And while Curlin certainly didn't perform poorly in yesterday's Man o'War at Belmont Park, he didn't make me want to run out and lay a futures wager on him in the Arc.

The winner of the Man o'War, Red Rocks, is a former BC Turf champion and a fairly solid grass horse...in America. Over in Europe, Red Rocks hasn't done anything of note in the last two years and that means that if Curlin were to run in the Arc he's gonna have to get a whole lot better on the grass or else he'll have no shot whatsoever.

To be fair to Curlin, the Man o'War was a pretty oddly run race, if you consider that it was 1 3/8 miles on the grass. Mission Approved and Sudan bolted to the lead and set insane fractions considering the surface and the distance (22.3, 47.3 and 1:11.4). There isn't a turf race in Europe that is going to see fractions like that...and that certainly won't happen in the Arc. Last year's Arc saw the opening half mile go in something like 1:15 or 1:16, a full four or five seconds slower than the Man o'War. That might help Curlin, as he didn't look comfortable sitting ten lengths behind the dueling pacesetters; perhaps he would have preferred to be in a tight pack and covered up.

Regardless of the quirky pace of this race I still didn't see enough of a power burst from Curlin that suggests that he could compete with the big boys in Europe. European grass racing is all about late speed an final fractions; you've got to be running harder and faster at the end than the beginning, Curlin didn't do that today. I'm also not sure that Curlin wants a mile and a half as he's now 0-for-2 lifetime in races beyond a mile and a quarter (losing to Rags to Riches in the Belmont in his other try).

The question now is what to do with this horse, where do you point him next? I'm guessing that the connections will give it another try on the lawn to see if he is able to improve his performance since many horses don't come alive until their second or third try on the turf. (Owner Jess Jackson suggests this very thing at the end of this Blood-Horse article.) But I think Curlin will have to be pointed to a challenging grass race (like the Arlington Million) because anything less won't give the connections enough information to determine whether he can compete in Paris.