Share All sharing options for: Curlin Heads to the Lawn to Prep for the Arc (Updated w/ Video Link) 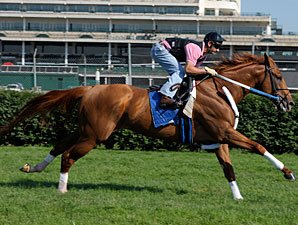 I haven't written much about horse racing lately due to the fact that there hasn't been a whole lot of good things to talk about. I haven't made a bet since the Derby due primarily to being fed up with break downs, arrogant trainers and owners, petty ADW disputes, medication arguments...and all the other peripheral distractions.

I actually think that a lot of the garbage going on right now with the game is a good thing, that it might actually lead to some constructive changes within the sport. Hopefully.

This weekend might mark the start of some good things surrounding the sport as reigning Horse of the Year, Curlin, will make his debut on grass in the Man o'War at Belmont Park. Should Curlin successfully make the transfer from dirt to turf, it is believed that his connections will point him towards the Prix de l'Arc de Triomphe at Longchamp Race Course in Paris the first weekend of October.

It is quite rare to see American horses compete in the Arc, generally due to the fact that American grass racing is traditionally well below the class of the Europeans. Our horses are primarily breed for speed, and the European classics require stamina and patience. Our best races and biggest purses are offered in dirt races; horses are initially pointed towards the dirt because that is where the value lies. Our grass horses are generally horses that contain flat-out, grass-only pedigrees, or have already failed to perform over the dirt and the grass is a last resort place to successfully race.

"Several American horses have run in the Arc, such as C.V. Whitney's pair of Fisherman and Career Boy, who ran into the legendary Ribot in 1956. Career Boy, however, did manage to finish a respectable fourth to the great Italian champion. Kentucky Derby and Preakness winner Carry Back went over in 1962, and although he finished 10th, he was beaten only 5 3/4 lengths. Raymond Guest sent Preakness winner Tom Rolfe in 1965, but the little colt got hung very wide turning for home and finished a well-beaten sixth behind the great Sea-Bird. Ogden Phipps' Intrepid Hero also made the trip, but faded after being in contention in the upper stretch. There have been others, but none have made any impact on the race."

If Curlin were to successfully compete in the Arc he would stamp himself as a legend in the history of thoroughbred racing. He's already a winner of a Triple Crown race (2007 Preakness), a Breeders' Cup Race (2007 Breeders' Cup Classic), and the richest race in the world (2008 Dubai World Cup), but the Arc is something different all-together. While the English Derby is the premier race for three-year olds in Europe, the Arc is the most prestigious of them all.

Currently, Curlin has established himself as one of the best horses in the last ten to fifteen years. But because of the light racing schedule of today's horses, Curlin would need to close out his career by doing something extraordinary to in order for him to place himself among the elites in the history of the sport. Winning a second consecutive BC Classic wouldn't fit the bill (see Tiznow). The Arc, however, would do just that. Saturday, he'll take the first step towards history.

Churchill Downs has a video overview of Curlin's work over the grass course last week on their website. This link will take you to the track video archive; if you click on "Curlin Pleases in Turf Work" you get a video and analysis of his grass move.

A couple of thoughts on Curlin's grass work.

1) In the early and middle portions of the work (the first frames that are shown on the video), you can see Curlin's long and easy stride. When we get close up in the second portion we see Curlin accelerating in to catch his workmate on the turn and in the stretch.

A key feature of many horses bred for the turf is high front leg action. Barbaro, a son of the influential turf sire Dynaformer, displayed a traditional turf leg action. Curlin's leg action isn't as pronounced as some, and he doesn't show that quick-burst leg action that we see from many turf horses, but he still resembles a horse that is going to take to the grass smoothly. Of course, taking to the grass and winning the Prix de l'Arc de Triomphe are two totally different things. But he at least looks comfortable away from dirt.

2) The key point in analyzing this work (and any workout, for that matter) is the manner in which the horse is running. If you look at the second portion of the video that shows Curlin catching his workmate on the turn and then running stride-for-stride with him in the stretch you see a significant difference in the two horses. The horse on the inside is being ridden fairly hard by the jock, and in fact shows him the stick on a couple of occasions. Curlin's jockey, Robby Albarado, is like a statue with no movement at all. The point to take away is that Curlin is doing this work all on his own while the other horse is being "asked" to go faster.

The Man o'War on Saturday should be a good test as to whether Curlin has what it takes to bring his game to the lawn. Scheduled to be entered against Curlin are the following horses:

A field of seven is on the agenda, two of which are former winners of the Breeders' Cup Turf. Should be interesting.