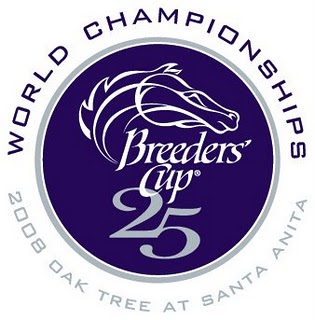 With two months to go before the 2008 Breeders' Cuo at Oak Tree, it's a good time to start taking stock of the current horse racing landscape. There are three new races this year and a new schedule for the two-day format. Below is the tentative Friday/Saturday line-up.

A few thoughts on the new races and schedule:

-I like the addition of the Turf Sprint but the Dirt Marathon will struggle to rise to the level of a Grade 3 race. The Juvenile Filly Turf really feels like overkill as the Breeders' Cup already has three races for juveniles, including an open race on the turf. Let's not encourage even more two year-old racing. The Euros have got to be licking their chops for this race.

-I don't like scheduling all the filly races for Friday; the F&M Turf and Distaff were always a staple of the early and late Pick 4s. Now we get a couple of boarderline Grade 3 races (Dirt Mile and Dirt Marathon) in their place. I'm guessing that the Breeders' Cup will eliminate "Ladies Day" fairly quickly when they see the handle for these big races on Friday.

-Renaming the Distaff to "The Ladies Classic" is beyond absurd. You don't see the NHL renaming their finals to "The US Mens Hockey Finals" because some people don't know what the Stanley Cup is.

Branding is important and in this case "Distaff" is the universal brand name in horse racing for a stakes race involving fillies three years-old and up. This is like re-naming the Kentucky Oaks the "Ladies Derby". Horrible.

-The fact that this year's Breeders' Cup is at a track with a sythetci main surface (Cushion Track) should truly make this a fantastic betting year with extremely wide open races. Several non-turf divisions (Sprint, "Dirt" Mile, and Classic) appear to have no clear leader due to the unknown of the Cushion Track and the unknown status of horses that have huge records on traditional dirt but are untested over the synthetics (Curlin, Big Brown, Midnight Lute).

Right now, it looks like the best horse in the world, Curlin, will most not go in the Classic. And early indications are that Big Brown will probably point towards the Turf. Some of Europe's top turf horses, however, will make an attempt in the Classic given the smooth transisiton that many grass horses make to synthetic surfaces.

-Benny the Bull, probably the top rated sprinter in the world, was retired this week due to a minor injury. He was 4th in last years Sprint in the monsoon that was the Monmouth Park Breeders' Cup weekend. With Benny out of this years Sprint, and defending champion Midnight Lute indicating that he wants nothing to do with a synthetic track, Lewis Michael moves to the top of the Sprint/Dirt Mile.

-In early October the Prix de l'Arc de Triomphe will be run at Longchamp in France. The top contenders in that race could, if they choose to ship to Santa Anita, go in either the Turf or the Classic. I'm guessing that this year's Classic will see a record number of Euros entered and perhaps we'll finally see someone pull of the Arc/Turf or Arc/Classic double.