The Great John Henry is probably my favorite horse of all-time due to his eccentric personality and his will to win. Close behind old John is the European Champion, George Washington (IRE), a horse that met a tragic end in last year's Breeders' Cup Classic.

Like John Henry, George Washington had what can only be described as a unique personality. A quirky horse that one time refused to enter the winners circle until all the other horses had left the track, George Washington seemed to make his mark wherever he went in Europe and the United States.

George was the European two-year old champion in 2005 and the champion miler in 2006. He was retired after running in the 2006 Breeders' Cup Classic and then brought out of retirement in 2007 after fertility problems in the breeding shed. I had the pleasure of watching George Washington make his final work prior to last year's Breeders' Cup Classic at Monmouth Park. In retrospect, that work can only be describe as both eerie and completely befitting this grand champion. The Friday morning prior to the Classic almost every horse on the grounds went to the track to put in a light jog or gallop. The dirt track was opened first and then was closed to allow the turf horses to put in some time over the grass course.

When the turf course was opened up, George Washington's trainer, Aiden O'Brien, brought out almost his entire string that he brought from Europe. A string that included Arc winner Dylan Thomas. The only horse not present was George Washington. After O'Brien horses completed their moves over the grass, he went back to the barn and brought out George. At this point, all of the other horses were done working on the grass and there was no one on the course. 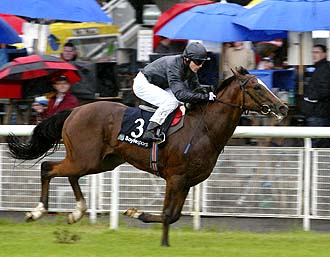 O'Brien brings out George and they begin to jog him over the main track since he was going to run in the Classic the next day. George had been on the track for maybe a minute when trainer Graham Motion made his was from the barn to the track in order to give BC Turf contender Better Talk Now his morning exercise. Motion was stopped by one of the Monmouth Park outriders (just a few feet from where I was standing) and told him that he had to wait until George was finished before he could take Better Talk Now to the turf course. Motion responded something to the effect of 'why didn't they work him on the dirt when it was open for everybody else this morning?' I began to wonder the same thing.

So Graham Motion and Better Talk Now stand waiting in the 7 furlong chute while George Washington gallops around the Monmouth Park main track completely alone. The eyes of everyone at the track that morning were on the European champion, a fitting tribute to this fantastic horse.

I don't know why O'Brien decided to work George all alone on the main track after everyone else had finished. Perhaps George didn't like to work with other horses around. Perhaps O'Brien felt that working him alone was the best way to get him acclimated to the track and his surroundings. Whatever the reason was I think it was very appropriate that Gorgeous George had at least onelast moment in the limelight.

Below are videos for three of George Washington's signature victories, including the Queen Elizabeth II at Ascot which was George's last career win.


George Washington winning the 2005 Irish National Stakes at the Curragh: