Lone Speed in the Arlington Million

Share All sharing options for: Lone Speed in the Arlington Million 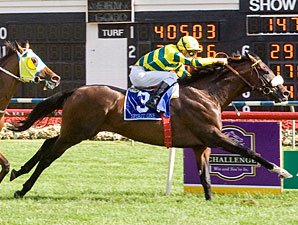 After blowing my Pick 3 and Pick 4 bets in the Secretariat Stakes on Saturday (Thank you very much, Winchester!!) I decided just to throw a straight win bet up in the Million. The morning scratch of Sudan pretty much eliminated any chance of speed duel and immediately made Spirit One (Fr) an attractive choice.

Spirit One, a colt that was making his first ever start outside of France, didn't show a lot of career wins on the racing form but he had been running in Group 3 and Listed Stakes races at Longchamp, Maisons-Lafitte, and Chantilly, which are some of the best courses in all of France (and Europe). Throw in the scratch of Sudan and it was very likely that the French raider was going to grab the lead uncontested. Einstein was the only other horse that would have any business being on the lead but you had to wonder if he really wanted to be "on it" as opposed to just tracking it.

The race played out about as well as I could have hoped as Spirit One, sent off at 13-1 odds, was able to grab a clear lead thanks in part to Einstein encountering some trouble at the start. The opening fractions clicked off in machine-like fashion:

Those fractions aren't as slow as what The Tin Man put up two years ago, but anytime you give a classy horse consistent and uncontested :24 second splits, that horse is going to have something left in the tank.

As the field came off the far turn it looked like Spirit One was going to have trouble holding on to his lead, however, this colt was able to find enough left in the tank to take the field wire-to-wire. Place horse Archipenko was boxed in along the rail and might have been able to get to the winner with a clean trip. He'll be a tough competitor in his next start.