Share All sharing options for: 2008 Breeders' Cup: The Final Countdown, Part I 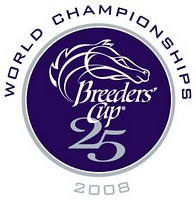 Just twelve days until the Breeders' Cup World Championships at Oak Tree. The prep races are all done and the pre-entries will be announced at the end of the week. Over the next few days I'll take a look at my preliminary Top 5 in each division. We'll start with the big boys in the BC Classic and the BC Turf.

Big Brown is out, which means that Curlin is at minimum even money to capture his second straight Breeders' Cup Classic. However, this could still be an interesting betting race if you think that Curlin might be vulnerable.

1. Curlin (EVEN) - He's the champ and without Big Brown in the field, he should be the odds-on favorite. I'm guessing he'll be 4/5 at post time, making him (in my opinion) a little bit of an underlay. Remember, this will be his first ever start on the synthetics and he didn't show a love for the turf in his only attempt. He could win on talent alone, but the odds could make him a risky bet.

2. Duke of Marmalade (IRE) (6/1) - He's got to be considered the best of the Aiden O'Brien trainees attempting to win the Classic. He's got stamina and fantastic turf form, which should translate nicely to the synthetic surface at Oak Tree.

3. Champs Elysees (FR) (8/1) - This horse is my sleeper pick right now, and a horse that I really think could perform well in this spot. This horse should be available at generous odds (I'm guessing 12/1 or higher), which I think presents a nice overlay. He's a true-blue grass horse that finished third in his only start on the synthetics in the Santa Anita Handicap. He was off slow that day and was 2nd to Go Between at the wire.

4. Go Between (10/1) - A so-so horse on the dirt and a Grade 3-type on the grass, Go Between has become a monster on the synthetics. That makes him a contender for this year.

5. Colonel John (15/1) - He's probably a little out of his league in this spot, but there's no denying his fantastic form on synthetic surfaces.

Casino Drive (20/1) - There's a lot of talk about this Japanese colt trying to win the Classic in his fourth lifetime start, and while I think he's got talent, he's going to have to be on another level to pull this off.

Tiago (30/1) - A grinder that has run well on the fake stuff time and again. I could see him winning if the race falls apart, but I think he'll need a lot of help up front to take this one down. Use him if you go deep in the exotics.

This, along with the Filly & Mare Turf, is my favorite race during Breeders' Cup weekend, mainly due to the juicy odds you can get on overlooked, second tier Euros that come over here. We'll know more after the pre-entries are announced, as the list of who's coming over from Europe tends to be in flux all the time. One thing is for certain, we won't see the Arc winner in this race.

1. Solider of Fortune (5/2) - Third in the Arc, the O'Brien trainee has had a light campaign in 2008 (three starts) and might just be ready to pop a big race. I'm looking at his Arc race as a prep for the BC Turf, and he finished well in that race as he was third to Zarkava and Youmzain. I think he's got a chance to really improve off that effort, although I think his odds might be a lot worse than Youmzain's.

2. Youmzain (IRE) (5/1) - Had he come over last year, Youmzain would have been my pick to win the Turf. This is exactly the type of overlooked Euro that wins this event every year or so. He's a hard knocker that finishes up near the leaders in Group race after Group race, which means he has tremendous class. As the saying goes: "Class on the Grass".

3. New Approach (IRE) (6/1) - This year's winner of the English Derby could make an appearance at Oak Tree for the Turf, and he'd be a top contender if he does. He's had a nice seven week lay-off since his triumph in the Group 1 - Irish Champion Stakes at Leopardstown in early September.

Spirit One (FR) (30/1) - The winner of the Arlington Million is a long shot in this race, in my opinion. He did his best running right off the plane (like most Euros), and then came up short in the the Goodwood. He doesn't scream mile and a half to me and I think he's got his work cut out for him here.


Later in the week:

Am I missing any? Good lord, that's a lot of races to bet on.