Share All sharing options for: Zarkava takes the Arc 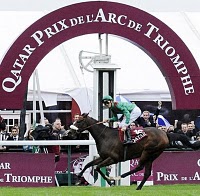 (Photo: AFP) Arguably the greatest horse in the world rolled to victory in Paris today. The unbeaten filly, Zarkava, began the 2008 Prix de l'Arc de Triomphe dead last but powered through the field in the stretch, navigating severe traffic most of the way, to take the most prestigious grass race in the world by a couple of lengths. The only filly in the field, and the first to win the Arc since 1993, Zarkava was clearly the best horse on the grounds.

The winner, in the green silks, was slow out of the gate and last for much of the early part of the race. As the field came into the false stretch at Longchamp she had only four horses beaten. But when the big running began on the final uphill stretch drive, Zarkava weaved her way through horses and sprinted by the leaders, and all of it under a hand ride.

Unfortunately for us in America, this great filly won't be coming over for the Breeders' Cup as her owners will give he a much deserved vacation. No word yet on whether she will come back to race next year. Perhaps we'll be fortunate enough to see her in the U.S. in 2009.

The video below is the American feed of the Arc which contains some beautiful slow motion shots of Zarkava warming up (right around the 2:30 mark) prior to the start. The race begins around the 3:45 mark.