Share All sharing options for: Battle Royale: The Juiceman, Ronco and Jack Lalanne

What would happen if Jack Lalanne, Jay "The Juiceman" Kordich, and Ron Popeil all got into a fight, you know, like a Royal Rumble? Who would you pick to the be ultimate winner? Let's handicap each contender: 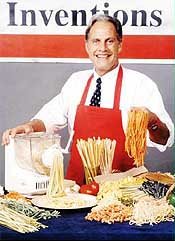 Ron Popeil, Mr. Inventor, the creator or the Ronco Food Dehydrator, the Pocket Fisherman, The Ginsu Knives, Great Looking Hair (Formula No. 9), the Pasta Maker, Mr. Microphone, and the Rotisserie Cooker. If you want something invented, Ron is your man.

I making Ron the long shot in this battle due to the physical fitness of the other two contenders, along with the fact that I just don't see Ron as a guy that could kick somebody's ass. Ron would probably fight dirty, and perhaps if he was allowed to bring a foreign object into the ring (like the Food Dehydrator), he'd have a chance. Alternatively, he could spray some GLH Formula No. 9 into his opponents eyes, blinding them permanently. 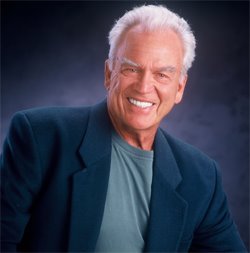 Jay Kordich, aka "The Juiceman"

Take a look at the picture to the right. Would you want to get into a fight with that guy? Talk about intense, the Juiceman has the 1,000 yard stare.

When I intially set out to handicap this event I found myself leaning towards making Jack Lalanne the overwhelming favorite. Then it took a gander at some photos and videos of the Juiceman and I was struck by two things. First, the Juiceman appears to be in pretty good physical condition and could probably hold his own against Lalanne. Second, I think there is a high probability that the Juiceman would fight dirty. Seriously, check out those crazy eyes - this is a man that wants to win at any cost.

I'm making the Juiceman the odds-on favorite in our Battle Royale. While I believe Jack Lalanne can initially hold his own, there is a high probability that the Juiceman (powered by the lifegiving power of his juice), will ultimately prevail.

Just for fun, here's Jim Carrey as "The Juiceman".

Back in his day Jack Lalanne would be a shoe in for this fight. But unfortunately, Father Time catches up with us all and Jack Lalanne is no expection. Jack in now 94 years old and while I think Jack's physical strength is probably a match for the Juiceman, in the end I think that Kordich will be too fast and spry for Old Man Lalanne.

As I was making the odds line for Jack Lalanne I cam across some information that Jack also had a juicer on the market ("Jack Lelanne's Power Juicer"). However, I was more than a little disapppointed to learn this as I believe that there's room for only one juicer in this battle. To make matters worse, the infomercial for Lalanne's juicer doesn't even feature Lalanne! Sure, he comes on at the end to spout a five second line, but that's it! Sorry, Jack, you lose some points with me for failing to appear in your own informercial.

Below is Jack Lelanne in his younger days demonstrating his fingertip push-ups.

Like any legitimate Battle Royale, a guest/celebrity referee is required. For this battle, since it involves kings of the informercial, I have selected pitchman Billy Mays for the task. Not only does Billy Mays possess a clear and powerful voice with which to bark out instructions to the competitors, but his vast knowledge of gadets and gizmos commands respect.

$100 to WIN on the Juiceman
$50 on Ron Popeil to attempt to hit one of the other two contestants with the Pasta Maker or Food Dehydrator.