I'd hate to see what happens if it actually snows

Share All sharing options for: I'd hate to see what happens if it actually snows

This link provides a list of Seattle and Seattle-area school districts that are closed today due to snow. Of course, there isn't actually any snow on the ground, they are just closing in preparation for possible snow today. Possible snow.

As a life-long resident of Seattle I am well aware of the insanity that occurs in this city any time snow is even predicted, let alone when it actually falls. From not knowing what to do when it actually snows to freaking out before a single flake falls. But the Winter of 2008 might be an all-time low for the city and the region in terms of their actions and re-actions. Whether it's the Metro buses that had tire chains on this morning to the schools that are closed in anticipation of snow, it is a sad commentary on the the region's ability to deal with any winter weather that doesn't involve rain. We can receive inches and inches of rain for months on end without any public panic, but one to three inches of predicted snow turns us all into raving idiots.

Here's a picture of downtown Seattle and of Red Square at the University of Washington from web cams at the Seattle Times. This is what it looks like in Seattle right now...and our buses are chained up and our public schools are closed.

UPDATED 1:31 PM: Current temperature in Seattle is 38 degrees, which has caused the little remaining snow and ice from this weekend to melt. Of course, our buses sill have chains on and our schools are still closed.

Metro Transit and the Seattle Public Schools should be embarrassed. 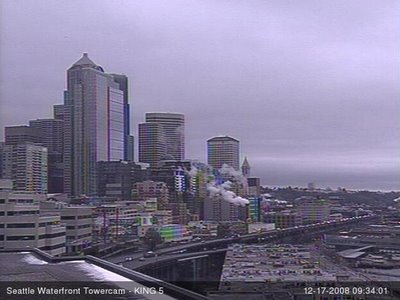 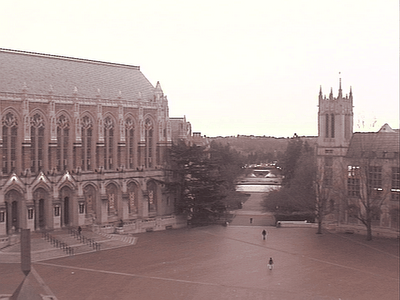