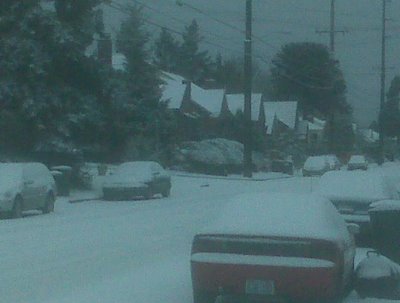 It only took an extra 24 hours, but Seattle's predicted snow finally hit the city early this morning.

I snapped the above photo this morning with my Blackberry as I waited for my bus to arrive, a bus that was about 40 minutes late. During the trip downtown, the bus driver informed the passengers that due to the snow and ice, many drivers would not be stopping on hills, at the bottoms of hills, or right at the tops of hills, due to the difficulty in re-starting in those positions. Of course, given the terrain here in Seattle, saying that buses aren't going to stop on or near hills pretty much means that Metro isn't going to stop at about 70% of the bus stops in the city. Oh well, at least they are getting some use out of their tire chains.

This might be a good time for me to get on my transit high-horse and point out a crucial item to all the politicians that think the solution to our mass transit problem is to put more buses on the street: trains can go up hills in snow.

The next time that King County Executive Ron Sims says that all we need to do is stick a bunch more buses on the roads to solve our traffic problems perhaps we should think about some of the things that buses can't do. A viable light or commuter rail system in the Seattle Metro area would allow people to actually get to work when it snows, instead of the region-wide paralysis that we current experience. I'm sure employers in the area would love to know that their people can get into work in adverse weather instead of the limitations provided by the current transit system. Just something to think about.

As for our December blizzard, the popular Seattle blog My Ballard is once again leading the way with coverage of this event in Seattle's favorite Scandinavian neighborhood. Speaking of Ballard, tonight would be a great night to pony up to the bar at the Viking Tavern for a few pints. Sully's Snow Goose on Phinney Ridge wouldn't be a bad spot either, but getting up to Phinney might prove challenging.