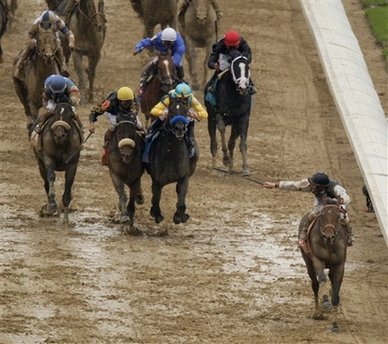 
As handicappers, we all blew this race. No, we didn't blow the race because we weren't touting Mine That Bird as the likely winner of the race or a horse that should be the favorite. We blew this race because we didn't put the clues together that should have led us to understand that Mine That Bird was a live long shot, a horse that had a legitimate, even if unlikely, chance to pull a huge upset.

I think that there were two definitive factors that made the result of this year's Derby "plausible" going in. Now, I'm not saying that I think it was likely that anyone would come up with Mine That Bird as the likely winner. I surely didn't. But there were factors that we all missed as horse players that gave the indication that Mine That Bird could have a chance in this race.

Most, if not all, serious handicappers pay close attention to every race on the card in an attempt to identify a track bias if and when it appears. Track bias can be one of the most powerful handicapping factors that a player will come across. The ability of the track conditions to "move a horse up" can sometimes trump all other "traditional" handicapping factors and players that ignore an established track bias are usually ripping up stacks of tickets at the end of the day.

The races run at Churchill Downs on Friday and Saturday were done so over an off track. The constant rain in the Louisville area caused the track to be labeled "MUDDY" or "SLOPPY" most of the weekend. Every single race on the main track on Friday and Saturday strongly indicated that the rail was the place to be. Race after race we saw horses make the winning move along the rail.

Following a win by Shaun Bridgmohan in an under card race on Derby Day, ESPN analyst Jerry Bailey asked the jockey what his strategy was going into that race and the Derby. Bridgmohan confirmed what everyone was seeing with their own eyes, he wanted to be as close to the rail as possible.

It was no secret prior to the Derby that the rail was the place to be.

Generally speaking, it's tough to know before a race which horses are going to run along the rail and which won't. We have a decent idea based on post position, but really, it is difficult to predict which is going to be where coming down the stretch in a race. Sometimes, however, there are clues that make this not as much of a guessing game.

Anybody that had a racing form or a track program on Saturday knew that Calvin Borel was going to be riding Mine That Bird. It was in plain sight for everyone to see (just like the golden rail). And anybody that follows racing should know that Calvin Borel absolutely wants to make his move along the rail in every race. He's nicknamed Calvin Bo-Rail, for crissakes!

So before the race we knew that the rail was golden and we knew that Calvin Borel, a notorious rail-rider was the mount on Mine That Bird. Why, as horse players, didn't we put two and two together and say, "well, yeah, Mine That Bird really doesn't figure on paper, but with the track bias and Borel in the irons, this horse has a very strong possibility of improving greatly on previous performances"? That was the question we should have been asking as handicappers.

The fact is, we as horse players missed the signs that could have led to conclusion that Mine That Bird had a punchers chance in this race. If we could have gotten past unknown trainers, racing in New Mexico, and Beyer Speed Figures, the evidence was all there. But, 99.9% of us couldn't do that. We saw two "slow" races in New Mexico (slow by BSF standards) and we say, "well, he doesn't belong". We see a trainer we've never heard of and think that he must not know anything about horses. It was our own biases as horse players that allowed us to be blinded to other possibilities.

Kentucky Derby 135 was just another lesson in Handicapping 101.

Beyer points out some of the factors that I have just alluded to, namely the rail and Calvin Borel, as well as the likelyhood that MTB also loved the slop.

All and all, not as much of a rant from Beyer as we saw following the Giacomo race. Of course, he couldn't help but write that MTB probably won't win another graded stakes race (do I get a prize for predicting that?), which as I alluded to above is irrelevant to the discussion of how we missed this horse in our handicapping.