Since the inception of the Synthetic Era (I'll call it 2006), many handicappers have had to deal with the challenge of how to interpret a horse m aking his final p rep race on a surface other than the one he is running.  Even before the adoption of synthetic surfaces at Keeneland, Arlington and other tracks, there was a lot of uncertainty as to how a horse would fare going from turf-to-dirt (or vice-versa...on those rare occasions).  With synthetic surfaces now in place at several tracks that host major Breeders' Cup prep races (Keeneland, Woodbine, Arlington, Del Mar, Hollywood), the challenge is even greater.

The last two years of Breeders' Cup races over the main track at Santa Anita were relatively straight forward for many handicappers: toss the dirt horses and concentrate on horses with prior success over synthetic and turf surfaces.  That wasn't a fool proof plan (see Lute, Midnight), but more often than not it pointed the player in the right direction.  With this year's Cup (and 2011, too) back on dirt, can we simply adopt the opposite philosophy of tossing turf and synthetic horses trying to run on dirt?

I went back and reviewed the result charts for the past four Breeders' Cups (Churchill 2006, Monmouth 2007, Santa Anita 2008 & 2009) and broke down each starter by the surface of their last prep race.  The overall caveat with any of this data, and with pretty much any data looking at past Breeders' Cups, is sample size.  In the last four years, twelve Breeders' Cup races have been run on dirt, sixteen on synthetic and nineteen on turf.  Throw in the fact that those races were run over three different tracks and a variety of weather conditions and it becomes difficult to draw any definitive conclusions.  At the same time, there are some trends that appear to be developing based on where a horse has ran its last prep race and its performance at the Breeders' Cup.

(One benefit of the next two Breeders' Cups taking place at Churchill Downs will be that we will have another two full years off data to toss into the mix.  At some point we're going to be able to start making much firmer observations about surface switches and Breeders' Cup performance.)

The fourth row, "Dirt Total", indicates how many horses ran their last race on dirt and then ran on the corresponding Breeders' Cup surface. 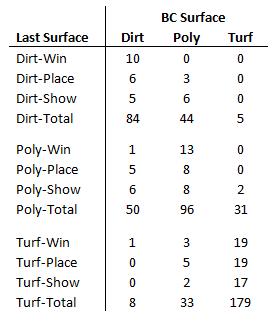 The first chart doesn't really tell us anything all that surprising - horses making their last start on the same surface as their race in the Breeders' Cup comprise most of the winners.  Of the 12 races on dirt in 07 and 08, ten were won by horses prepping on dirt, 1 from turf (Dreaming of Anna) and one from a synthetic surface (Street Sense).  (Oddly enough, the 2007 Juvenile was swept by horses that ran their last race on a synthetic surface: Street Sense, Circular Quay and Great Hunter)

The second chart (below) takes the above data a step further to compare the total number of starters that made their last start on a specific surface to the overall percentage of winners.  The purpose of this chart is to see whether horses from specific surfaces win "their fair share" of races when compared to total starters.  For example, if we had 60 total starters in all dirt races, and those 60 were broken down equally between all three surfaces in terms of prep races (20-dirt, 20-poly, 20-turf), do members of each group win or finished in the money at the same or different rates. The chart below summarizes these rates since 2006. 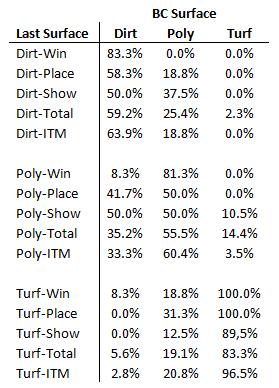 As we can clearly see from above, horses that ran their final prep race on dirt represent 59.2% of all starters in dirt Breeders' Cup races since 2006, but they have won 83.3% of those races.  Last out dirt starters, however, represent 25.4% of all starters in synthetic BC races but none have won, with 18.8% finishing in-the-money ("ITM").

Last out dirt runners obviously fared poorly when switching to synthetic at Santa Anita the last two years (0-for-44), although you could make an argument that those numbers are a bit misleading.  For instance, Midnight Lute, winner of the 2008 BC Sprint at Santa Anita, made his last start before the Breeders' Cup at Del Mar where he ran a horrible race on the Polytrack and finished near the back of the pack.  He was a confirmed dirt winner and had won the Breeders' Cup the year before at Monmouth Park.  Technically, Midnight Lute was a "last out Poly" winner but his past performances clearly indicated he was a confirmed winner on dirt throughout his career.  At the same time, there is no denying that dirt runners did not win their fair share of races on synthetic the last two years (which begs the question as to why people were still betting those horses that last day of the 2009 Breeders' Cup).

If we look at each category and simply zero in on horses that finish ITM as compared to the number of starter from that category we get a bit of a different story.  Look at the numbers for dirt horses across each surface - last out dirt horses finished in the money 18.8% of the time in synthetic races and they represented 25.4% of all starters.  There is certainly a gap between those two percentages but given the complaints from many following the last two BC's I don't know that you'd call that a dramatic difference; last out dirt horses didn't win but they didn't all finish at the back of the pack.  Similarly, look at horses making the move from poly-to-dirt in Breeders Cup races - those horses represent 35.2% of all starters and they finished in the money at about the same rate (33.3%). 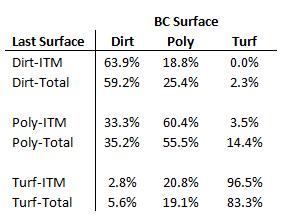 A big deal was made of the turf-to-poly move at the last two Breeders' Cup, especially given the victory by Ravens Pass in the 08 Classic, but look at the turf-to-poly numbers for the last two years: last out turf horses represented 19.1% of all starters in synthetic Breeders' Cup races and 20.8% of all winners.  There is nothing hugely out of line with those numbers - turf runners didn't win at a better rate but they weren't compromised by the switch, either.  The one thing those numbers reinforce is the notion that turf horses transfer their form to synthetic better than dirt horses..  If that move was as powerful as many have suggested (and I thought it was expecting it to be much more successful) we would expect to see a bigger gap between those two numbers.

One takeaway that has been rock solid the past four years is that turf horses win turf races at the Breeders' Cup.  Not one horse running its last prep race on a surface other than turf has finished in the top two in the last four years and only two have even finished in the money (Coronet of a Baron and House of Grace - both in Juvenile Filly Turf). Whether those numbers will continue to hold over the next few years is a guess but it's hard to ignore that over 15% of all entries in turf races at the Breeders' Cup since 2006 prepped on dirt or synthetic and almost all have missed the board.