Not an Ordinary Horse Racing Fan

Share All sharing options for: Not an Ordinary Horse Racing Fan

Prior to the Breeders' Cup I wrote a couple of posts about the fact that I would be attending the Cup with a member of our military who won a trip to Louisville as part of Jim Beam's Salute the Soldiers program.  The story below is an in-depth look at the Marine pilot that was honored that weekend.

Sports fans, in general, are known to go through extraordinary means in order to follow their favorite teams and players.  Horse racing fans, a different breed of sports fan all together, are as dedicated as any fan of any other sport.  This is the story of a horse racing fan that finds a way to follow the sport he loves in what can only be described as extreme circumstances.

It’s six thirty in the evening on the first Saturday in May in Louisville, Kentucky, and the 136th running of the Kentucky Derby is about to begin at historic Churchill Downs.  135,000 fans have packed the venerable horse racing track and millions more around the world are glued to their television to see which horse will win the Greatest Two Minutes in Sports.  The Derby, the most popular horse race in North America and one of the greatest in the entire world, is a piece of Americana - it’s part of what makes us who we are.

At Churchill Downs, the site of every Kentucky Derby in history, the clubhouse is filled with ladies’ and their Derby hats and men in suits and ties, while the grandstand and the infield is packed with Derby fans cut from a different cloth, some wearing hats more representative of a school art project.  Whether they are holding a beer or a mint julep, dressed in a tie or a t-shirt, cheering for the favorite or the long shot, the Derby represents something special to all of them.

Half-way around the world, it’s 2:00 on a Sunday morning and Capt. Adam Campbell of the United States Marine Corps, an avid horse racing fan himself, is also preparing to watch the Derby.  But Capt. Campbell will watch the race in a manner much different than any other person in the world.

Capt. Campbell is stationed at Kandahar, Afghanistan where there are no TVs on the base broadcasting the Kentucky Derby and there are no live video streams on the web that would allow him to watch on this computer.  To a casual fan of the Derby this would seem an impossible situation to overcome, but Capt. Campbell is not your ordinary horse racing fan.

Hours earlier, on what was the first Saturday in May in Afghanistan, Capt. Campbell flew one of his many missions in support of Marines on the ground in Operation Marjeh, a mission to eliminate a Taliban stronghold in the Helmand Province.  On this day, Derby Day, he would fly an American flag from his Harrier jet because he wanted to have a flag for himself that he flew from his jet on the day of the race.  Kentucky Derby day is a special day for him, and even though he was half-way around the world, he wanted something equally special to remember it by.

Back at the base that night, Capt. Campbell’s roommates are fast asleep as he prepares to watch the Derby the way that he watches all of the major horse racing events that take place back home, through the wonders of computer technology.

During his time in Afghanistan, Capt. Campbell would communicate with his wife, Melanie, over his computer using Skype, the software application that allows people to make video phone calls over the internet.  On this day, and on other major racing days, Melanie would place her computer in front of their television so that the camera can beam the picture to Afghanistan, allowing Adam to watch.  The picture is anything but high definition, and the races are shown in reverse with the horses running clockwise, but it’s the only way he’s able to watch the sport he loves so much while he is thousands of miles from home.

On this day, May 1st, 2010, Super Saver, trained by Todd Pletcher and ridden by Calvin Borel, wins the coveted Run for the Roses by 2 ½ lengths over Ice Box and Paddy O’Prado.  It’s the first Kentucky Derby win for trainer Todd Pletcher after a series of defeats over the past decade, and Pletcher just happens to be one of Capt. Campbell’s favorite trainers.  Happy to see Todd Pletcher win the biggest race in America, Capt. Campbell sent the American flag that he had flown from his Harrier jet on the first Saturday in May in Afghanistan to the trainer as congratulations gift for his first Derby victory.

After receiving the flag, Pletcher contacted Capt. Campbell to tell him how happy and appreciative he was to receive his gift.  The two would remain in contact via email throughout the year, and at this year’s Haskell Stakes at Monmouth Park, where Capt. Campbell had his "Welcome Home from Afghanistan" party with friends and family, Adam and his wife met the Eclipse award winning trainer.   At the Haskell, Todd Pletcher informed Adam that if he has a horse in the 2011 Kentucky Derby, he wanted to take Adam and Melanie to the race as his personal guests.    For an avid horse racing fan like Adam, that was an unbelievable offer.

When our men and women in uniform deploy overseas, the lives they leave behind at home don’t suddenly come to an end.  They leave wives and husbands, parents, children, friends and loved ones; they give up a piece of their life in order to serve.  The risk that they put forth is both a physical and an emotional one.  And whether we’re talking about the pilot providing vital reconnaissance and air support, the eighteen-year-old Marine on the ground that lives in an Afghan village, doesn't shower for weeks on end and dines regularly on MREs, or the countless other service members who do their job on a daily basis, the thought of their life back home is never far from their minds.

Letters from home, phone calls with loved ones, care packages from parents, and, yes, watching a horse race from half-way around the world at 2am – those are ways that members of the armed forces remain connected to the things that they leave behind.  Their "civilian" lives don’t cease to exist, in fact for many, the things they leave behind and how much it means to them probably becomes clearer. 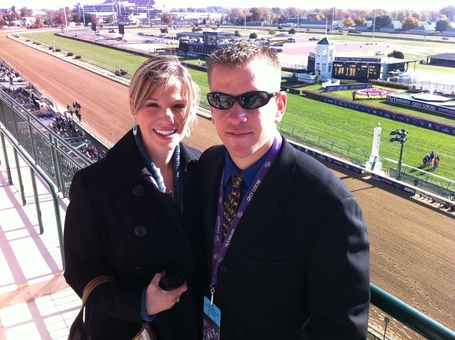 Capt. Campbell attended this year’s Breeders’ Cup as part of Jim Beam’s Salute the Soldiers with the Spirit of America program that provides returning service members a VIP experience at a sports or entertainment event.  His wife Melanie nominated him in the contest and I had the pleasure to meet them both in Louisville.

Horse racing fans can spot other horse racing fans like a dog spots his favorite toy that's wedged under the couch - it's almost instantaneous.  I had never met Capt. Campbell prior to meeting him in Louisville but it took only a small amount of time to dispense with the pleasantries and start in-depth discussions of which horses each of us liked that weekend.  Who do you like in the Juvenile?  Is Goldikova a lock in the Mile?  How's the pace going to play out in the Classic? We talked jockeys, trainers, surface switches, post positions...everything and anything that had to do with which horses might win over the next two days.  When die hard handicappers get together to talk horses, it's like they've known each other for years.

Beyond the discussion of handicapping and the racing form, three things about Capt. Campbell became readily apparent through my conversations with him at this year’s Breeders’ Cup: his love and friendship with his wife Melanie, his passion for horse racing and his dedication to service.

When he was first informed of the fact that he was selected to attend the Breeders’ Cup through the Jim Beam Salute the Soldiers program, he was incredibly humbled but also acutely aware that any of his fellow service men and women deserved the honor just as much as he did.  He recognized that all of them couldn't be there with him at Churchill Downs to be honored, so he honored all of them as well he could by representing the best that our armed forces has to offer and by speaking with great praise and admiration at the job that all of them do on a daily basis.

When Capt. Campbell talks about his missions in Afghanistan and the support he provides to his fellow Marines on the ground, he does so with great pride.  He is honored to be able to provide support to those troops and it’s a privilege to do anything he can to make their jobs safer and easier so that they can return home to their loved ones.

Not an Ordinary Horse Racing Fan

Horse racing fans (and horse players in general) are a special breed of sports fan.  In order to really "get" the sport you have to be around it and follow it closely.  Dedicated racing fans have a variety of quirks and idiosyncrasies they go through in order to follow the sport, some of which might seem strange to those on the outside.  Whether it’s the favorite place in the paddock to stand, the spot on the rail that they have picked out, or the room in their house that is filled with old racing forms and historical memorabilia, horse players operate in a world of their own.  And sometimes, in order to enjoy the sport the sport that they love so much, that world is viewed thousands of miles away through a laptop computer pointed at a TV screen with a horse race running in the opposite direction.  Even in the world of die hard horse racing fans, that’s not something that happens every day.