If you are a fan of the sport of horse racing, there is nothing that compares to the Kentucky Derby - it's the pinnacle of the sport.  Sure, the hardcore gambler usually prefers the Breeder's Cup (those are the two best betting days of the year), but for the pure love of the game, the Derby is at the top.

Someone once said, ask 100 trainers which race they'd want to win the most and 99 of them would say the Kentucky Derby.  And the other one is lying.

From many owners, trainers, jockeys, and breeders, the ultimate goal of their career is to one day just have a chance at running in the Kentucky Derby.  Winning is just the icing on the cake.

The allure of the Derby is, in part, due to the extreme difficulty in just making the race.  There are anywhere from 30,000 to 40,000 thoroughbred horses born each year in North America, and only twenty of them will make it to the Derby.  And while the odds are astronomical there's something else that makes the Derby special, at least for me, and it's this: though many have tried, you can't buy the Derby.

In an age where we watch sports teams throw money around like it's tissue paper in an attempt to buy themselves a championship, the Derby is a race where simply having a lot of money doesn't guarantee success,   That's not to say that there aren't people who try to outspend everyone else, we only have to look at the $16 million The Green Monkey to see evidence of that.  But despite some owners who can write an endless stream of checks for any horse that they want, the Derby is a race that year after year you just can't buy.

Having a lot of money isn't a hindrance to winning the Derby, but it certainly doesn't guarantee anything, not even a spot in the starting gate.  Just look at the money spent by Shadwell, Goldolphin, and the other Dubai owners; millions upon millions each and every year on thoroughbreds.  Some of these horses do well and some we never hear of.  And none of them have ever won a Kentucky Derby.

Below is a look at the sale numbers (or stud fees) for some of this year's Derby contenders: 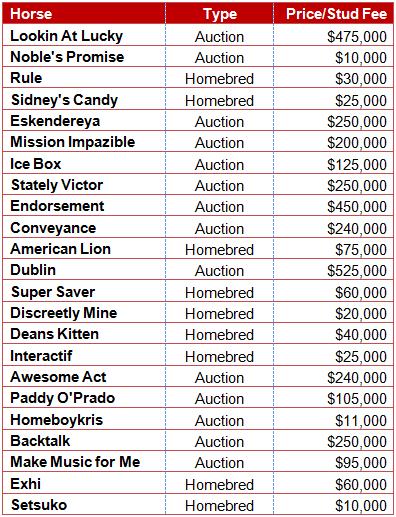 That list makes you kind of cheer for Noble's Promise, doesn't it?  A horse sold for only $10,000 at auction, Noble's Promise was purchased at the Keeneland November sale in 2007, a sale that saw the top horse (a son of Sadler's Wells) go for $10.5 million and thirty-eight other horses sell for more than $1 million.  None of those million dollar horses will run in Saturday's Kentucky Derby, but Noble's Promise will.

While there are plenty of horses on the above list that cost a lot of money (I won't pretend the $500K isn't a lot), in the horse racing world there is nothing on the "very expensive" side.  We don't have a single horse that anybody paid over a million dollars for, and every year there are people doing just that.  Instead we have a collection of auction horses and homebreds of various values, horses that when they were purchased the owners and trainers "hoped" could turn into something special. In the sport of horse racing, however, nothing is guaranteed.

Horse racing may be the "Sport of Kings", but just being a King won't help you win the Kentucky Derby.