The official morning line odds for the 2010 Preakness won't be revealed until after the draw on Wednesday, but I've spent the last couple of days working on my own odds line that I'll use for comparison purposes.  Below are the potential Preakness starters and their odds on my line. 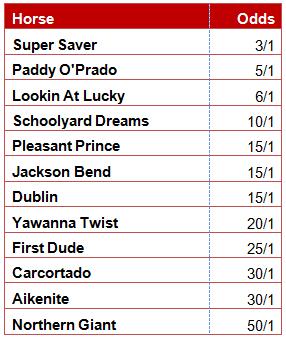 Super Saver: Might be a little high for him as essentially I've got him at a 25% chance to win....he could make sense at 5/2 and may get revised following the draw and final field selection.

Paddy O'Prado: I suppose the allure of this colt for me is the possibility that he's a much better runner on dirt than the synthetic and turf surfaces that dominated his pre-Derby career.  The danger is that he simply just loved the slop. Still, Romans seems to have him in top form right now.

Lookin At Lucky: I'm fairly certain that this colt will be at least the second choice on the board on Saturday afternoon but I've got him third just slightly behind Paddy.  He had to do a lot of work just to grab 6th in the Derby and I'm wondering how much that took out of him.  If he were to fire a sharp work in the next day or so that would help alleviate some concerns.

Schoolyard Dreams: Given the right trip, I think he's got as good of a chance as a lot of these colts to score an upset.  He might represent some good value on the board.

Pleasant Prince: A lot of comparisons are going to be made between this colt and Ice Box due to them finishing a nose apart in the Florida Derby.  Ice Box, however, went directly from that race to the Derby while this colt ran in two more races.  I'm a little worried about how much he'll have in the tank and I have questions about how much pace he'll get in front of him.

Jackson Bend: He's a gutty horse that usually runs a solid race but I'm not convinced he's at his best in races at 1 1/8 miles or longer.

Dublin: As much as I like this colt I just can't justify him at anything below 15/1.  He's a must use in the exotics, however.

Yawanna Twist: I could see this colt running a big race, but I'd want to get some nice, fat odds before I'd place a win bet on him.

First Dude: He's kind of a tweener to me: there are some things to like (decent tactical speed), and some things to be wary of (his performance declined once he stepped up in class).

Aikenite: This might be a little low...I wouldn't quibble with someone that thinks he's more like 40 or 50/1.

Northern Giant: His best races just have been a step below what we've seen from the top end of his rivals.  Like any horse, he could win, but he's certainly not likely to do so.