The Kentucky Derby is widely considered one of the best, if not THE best, betting day of the year.  A twenty horse field, the longest distance any of the horses have ever run in their lives, and a mass of 150,000 people creates an atmosphere of the "unexpected".  The Preakness, on the other hand, is a much less hectic affair.  For the horses, trainers, jockeys, and owners, the stakes are no less important.  But for the player, there is certainly a different mindset when trying to make constructing bets for the Preakness as opposed to the Derby.

I've gone through the results charts of the last ten editions of the Preakness and came up with the following chart illustrating the pari-mutual payouts for the various bets offered by Pimlico. 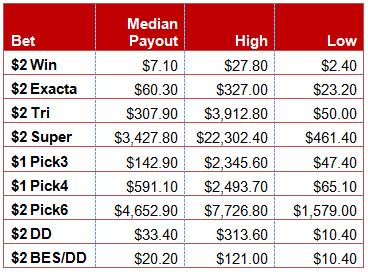 The excel file with all of the data from the last ten years (along with the same data for the Kentucky Derby) can be found in this Triple Crown Payouts file.

Some thoughts and points about the data: