A few housekeeping items this morning:

-You can find all the changes for the Pimlico card over at their official site.

-It looks like Pimlico is going to luck out with decent weather today; the forecast calls for sunny skies with only a 15% chance of rain.  Let's hope that Joe Weatherman is right.

-I know there are a lot of new eyes at the site this week, so if you are new to the sport of horse racing and looking to get in on the Preakness betting action, (and, of course, you live in a state that allows advance deposit wagering), you can wager through any number of licensed on-line sites, including our new SB Nation partner, Youbet.com.

-Unfortunately, the Preakness under card will not be available on ESPN today (like the Derby under card was two weeks ago).  If you get ESPN3 through your internet provider, you can watch it there.  Otherwise you'll need HRTV (available on Dish and some cable outlets) or a live video stream through an ADW.

This is a sad turn of events for the sport as ESPN used to show the entire Preakness under card, as well as a showing several races from Black-Eyed Susan day the Friday before.  But apparently the national cheerleading championships are a better event for them to show...I'm sure it costs a lot less to produce.

-I'll have the results for all of the Preakness under card races at the bottom of this post, including all of the pari-mutuel payouts. 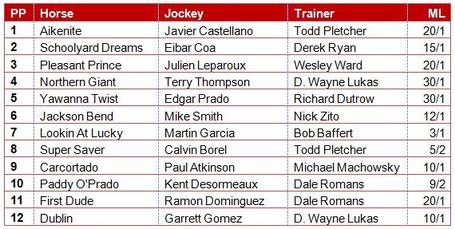 Turning to the Preakness under card, the Grade 2 Dixie looks like a race where we could have a vulnerable favoritie in the 4-Just as Well (3/1).  This horse just missed winning this race last year and he rattled off three very nice performances during the summer of 2009, but he's been off form for a while now.  His last start came during the Keeneland spring meet where he finished a lackluster fourth in the Grade 3 Ben Ali.  That was his first race since trying the Group 1 Japan Cup in late November.  Seems like a good time to try and beat this one.

Christophe Clement's Grassy (5/1) will be making only his sixth lifetime start after .  He finished fourth beaten only by a length and a half in the Grade 1 Jamaica Handicap at Belmont last fall, so he's flashed some decent talent in his short race career.  The pace might be a little slower than he'd like in this race but I think he could be sitting on a big effort today.

The ninth race Grade 3 Gallorette Handicap will feature a heavy favorite in 4-Rainbow View (Even), a former Group 1 winner in France in 2009.  An interesting upset possibility is the 3-Ave (GB) (5/1), a first time North American starter under the training of Roger Attfield.  This filly was a cut below the favorite over in Europe but sometimes it's best to try and catch these runners their first time off the plane.  The layoff is a little concerning but if Ave drifts up on the tote board like I expect her to, she could be worth a look.

For the Preakness I'm going to key Super Saver on top of my exactas with probably Schoolyard Dreams and Paddy O'Prado on the bottom....I might toss Yawanna Twist into the mix, as well.  I'm also going to key Super Saver with Grassy in a Dixie/Preakness Daily Double.  I'm not going to decide on any Preakness win bets until the odds board is stabilized and we have a good idea what kind of value we are being offered.