Stakes Calendar: A look ahead

Share All sharing options for: Stakes Calendar: A look ahead

Even though Triple Crown season is winding to a close, there are a lot of good stakes races coming up over the next couple of weeks, especially on the lawn.  Half of all the graded stakes taking place prior to the Belmont will be on the grass as tracks start to ramp up their turf racing in the wake of better weather.

Below is a summary of some of the high profile stakes taking place in the coming weeks. 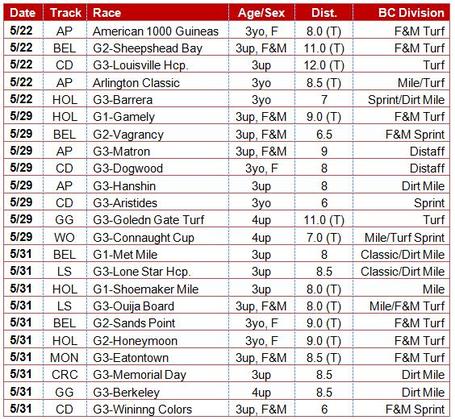 -The Grade 1 Met Mile is expected to feature Quality Road, the runaway winner of the Donn Handicap at Gulfstream this past winter.

If we took a quick snap shot of the Classic division right now we are looking at Quality Road, Zenyatta, and Rachel Alexandra currently in training and racing, with Summer Bird and Mine That Bird still waiting to make their 2010 debuts.  We can probably toss Lookin At Lucky and Super Saver into the mix, as well (especially Super Saver with the Classic at Churchill Downs, a track that he apparently likes to run on), along with whichever horses put in big performances at Belmont.

-There are two key races in the Sprint division on tap, the G3-Aristides and the G3-Winning Colors.  I'll call them "key" at this juncture because with the Breeders' Cup taking place at Churchill Downs this year I think it's important to keep an eye on horses that run well over the track during the summer.  Even though we are a long way from November, a strong performance over the Churchill surface in the summer could point to big things in the fall.

The Washington-bred Atta Boy Roy, winner of the Grade 2 Churchill Downs on Derby day, is among the nominees for the Aristides.

-Like the two sprint races, the Louisville Handicap is another race that could give us a glimpse of horses that might take a liking to the Churchill course.  One of the more interesting nominations for this race is Lignon's Hero, a Brazilian-bred and races horse that would be making his first North American start in the Louisville shout he enter.  Lignon's Hero last race was a two-mile allowance event at Meydan in the UAE in late February.

-In addition of the stakes taking place in North America there are a host of top-quality group races occurring in Europe.  The English 1,000 and 2,000 Guineas took place at Newmarket on Derby weekend, and this Saturday will feature the Irish 2,000 Guineas at The Curragh.  On June 5th, the English Derby (known as the Investec Derby this year) will run at Epsom Downs.