Share All sharing options for: Opening Day at Monmouth Park

The "$50 million in 50 days" Monmouth Park meet kicks off tomorrow with a tasty 13-race card featuring and average of ten horses per race.  The feature race on the card is the $100,000 Elkwood Stakes for three year olds and up going a mile and a sixteenth on the turf course.  The Elkwood features the smallest field of the day (seven entries, plus one "Main Track Only") but it should be a highly competitive affair.

The top four contenders, based on their previous accomplishment (and it terms of the morning line) are 1-Staying On (IRE) (7/2), 4-Kiss the Kid (3/1), 5-Get Stormy (5/2), and 6-Pleasant Strike (3/1).  Staying On is making his second start in North America for Christophe Clement after tiring in the stretch of an allowance event at Gulfstream in late January; however, that was his first  race since a Group 3 event at Windsor in late August of 2009.   The Elkwood's 1 1/16 mile distance will be the shortest race he has run since racing in the Doncaster Mile last April, which is the last race this colt has won.  Staying On likes to run on or near the lead in the early stages, although the races he's led have all been in Europe where the pace tends to be a little slower early on.  Still, this colt should be positioned forwardly soon after the gate opens.

Kiss the Kid gives a good account of himself each and every times he sets foot on the track, with a few minor exceptions.  He finished a strong second to Dubious Miss in the Grade 3 Ben Ali during the Keeneland spring meet but hasn't touched the winner's circle since early in 2009. There's a possibility for afternoon rain tomorrow in Oceanport, which might be a great sign for this colt; Kiss the Kid has run well in races taken off the turf and sports a solid record over wet tracks (5-2-3-0).  He wouldn't be my pick if this race stays on the turf, but toss some rain into the equation and a switch to the main track and he'll warrant a second look.

The morning line favorite, Get Stormy, looks like he could be the lone speed in this spot, a powerful angle in any race.  However, this colt hasn't seen the track for a race in a quite some time (November 15th, 2009), and his trainer, Thomas Bush, is a weak 4-for-62 (6%) with horses coming in off of a 180+ day layoff.  He is, however, 1-for-6 with 180+ lay-off horses in stakes races (both graded and ungraded).  Tough call on this colt; a front-runner that is going to try and lead them all the way coming in off a 180+ day lay-off?  Seems like there's a good chance that this colt will be a little short.

Pleasant Strike comes in fresh off of a third place finish in the Grade 3 Miami Mile at Calder on April 25th, his first start since late November.  He may be a little compromised by the pace as he generally does his best running from well back in the pack.  With Get Stormy the possible lone pacesetter (with maybe Staying On involved early), it doesn't look like he going to have too much speed to run at.  However, he's run well on the Monmouth Park turf course in the past (3-0-3-0) so it wouldn't be a surprise to see him contending for the win in deep stretch.

If the odds stay at around 7/2 on Staying On, I'll lean his way for the win.  His recent effort at Gulfstream should have him physically ready, and in a race with not a lot of speed he could find himself in the garden spot early on.  If Get Stormy comes up short in his first race off of a long lay-off (which I think he might), then this colt will have the opportunity to get first run on the rest of the field when they hit the top of the stretch.

Below is a summary of the races, purses, and field size for opening day: 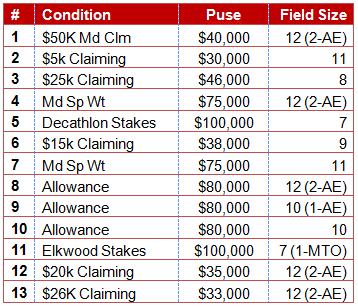 Entries for the entire Saturday's card at Monmouth Park, along with morning line odds, can be found at Brisnet.