It's been 32 years...who should have won the Triple Crown?

Share All sharing options for: It's been 32 years...who should have won the Triple Crown?

There might not be a horse going for the Triple Crown this year, but that doesn't mean we can't reminisce about past near-misses.  Below is a list of the horses that have been denied thoroughbred racing's ultimate prize since Affirmed won the 1978 Belmont Stakes. 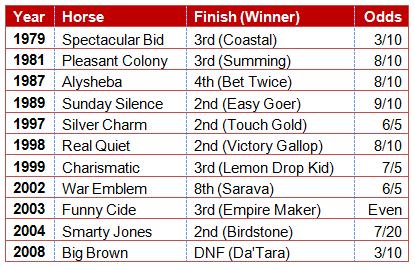 Horses that won the Belmont Stakes and one other leg of the Triple Crown:

Which of the above "near misses" do you think was the biggest surprise?

For me, any list of the best horses to not win the Triple Crown in the last 32 years has to begin with Spectacular Bid.  The Bid was leading by three lengths after a mile and a quarter but faded badly to 3rd at the finish in what was one of the worst rides you will ever see in a big time race in your life. (Video)  For some unknown reason, Ron Franklin decided to move The Bid to the front of the pack into the teeth of torrid factions down the backside.  By the time he was exiting the far turn, Franklin was already asking for everything that the colt had.  From there it was all over but the crying as Coastal and Golden Act passed the tiring Bid in the stretch to deny racing its third Triple Crown winner in three years; little did we know that we wouldn't have seen one since.

Prior to 2008, the biggest flop by a horse going for Triple Crown glory was War Emblem's 8th place finish to winner Sarava in 2002.  Every other horse gunning for the big prize since 1978 had managed to at least finish in the superfecta.  All that history changed the day that Kent Desormeaux and Big Brown didn't make it back to the finish line in the 2008 Belmont Stakes.  Many will probably have Big Brown atop their "best-to-be-denied" lists, but I was surprised at the number of players that I knew that were vehemently betting against the colt in the Belmont primarily due to the foot issues he had to deal with in the three weeks following his Preakness victory.

Media darling Smarty Jones was a shocking upset victim to Bridstone in 2004, but in retrospect his loss wasn't that shocking.  Yes, Smarty was clearly the best three year old in a year that left a lot to be desired (at least in the spring), but a mile and a half race for a colt sired by Elusive Quality was just too much.  One needs no more evidence of the importance of pedigree in thoroughbred horses than to watch Smarty Jones' stride noticeably shorten in the middle of the Belmont stretch in 2004. (Video)

Perhaps the more interesting list is the one containing horses that won the Belmont and one of the other two legs of the Triple Crown as there are certainly some high quality colts in the likes of Point Given, Thunder Gulch, Swale, and Afleet Alex.