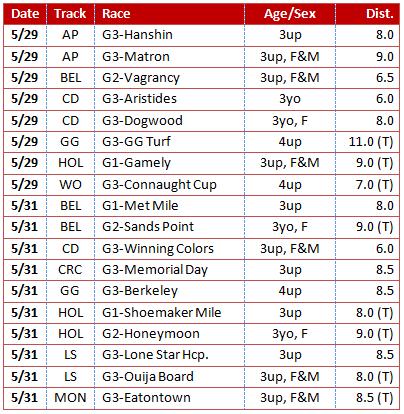 -A couple of decent stakes races at Arlington this afternoon.  The Grade 3 Hanshin, a one-turn mile on the Polytrack, drew a field of nine horses and eight betting interests (Recapturetheglory and Brothers Nicholas are coupled). Gran Estreno (Arg) (5/2) is one of two synthetic and Arlington Park monsters in this field (6-4-0-1 on synthetics, 4-for-4 on the Arlington main track). And while Gran Estreno will likely be the betting favorite, but it's the other synthetic/Arlington dominator that I like in this spot, 8-Wildeydsouthernboy (4/1).  This will be a bit of a test for this horse in terms of class, but he's brilliant on the plastic at Arlington Park (7-6-0-0).  The only drawback on the 8 is the fact that trainer Hugh Robertson is an amazing 0-for-6 in graded stakes at Arlington over the past five years.  It's truly remarkable that a top trainer like Robertson has struggled so much in the graded ranks.

-Euphony is back to defend her title in the Grade 3 Arlington Matron at a mile and an eighth on the Polytrack.  Her only previous effort on plastic and at Arlington was lat year's race that she won after a great stalking trip.

Perhaps the most intriguing filly in the field today is the 3-Askbut I Won'ttell, a Chris Block trainee that exploded for a 107 Beyer in her last race, a restricted stake event over this same Arlington Park Polytrack.  There are two ways to look at that last race: it's either a fluke that she'll bounce off of today, or the switch to the Polytrack woke her up (that was her first attempt at running on synthetics after a career predominately on the turf).  The 6/1 morning line odds make her an attractive wagering option.

-I'll be keeping an eye on the Grade 3 Aristides at Churchill Downs where the Washington-bred Atta Boy Roy will try to make it two-for-two in Louisville after winning the Grade 2 Churchill Downs on the Derby under card.  It's not too often that a Washington-bred or a former Emerald Downs horse makes noise at the national level.  He's got a tough task ahead of him today, as Cash Refund

-Today is the third day of the Monmouth meet and the third day of the meet-long Survival at the Shore handicapping contest.  The contest involves picking three horses, one in each of three pre-determined races, of which one of the three must finish in first, second, or third.  If one of your selections finishes in the top three in one race, then you stay alive and move on to the next day.  At the end of the meet, the highest bankroll of the surviving players, wins.

-Trainer Dale Romans appeared on HRTV's Pursuit of the Crown on Friday and he had this to say about his Belmont Stake contender, First Dude, when asked if the lack of speed in the race would put his colt on the lead:

"We'll do like we did in the Preakness...just leave it in his (Ramon Dominguez's) hands, he definitely knows his way around Belmont Park and let him decide after that..."

When asked about how First Dude is training coming into the Belmont, Romans noted the following:

"He came out of the race in great shape.  He's an improving horse that keeps getting better and better and I don't think we've seen the best of him.  He was kind of a big gawky colt as a two year old and it's taken him a while to figure it out; he's always had a lot of natural talent.  It seems like the Preakness was his breakthrough and he might have figured out racing."

If you're a fan of First Dude, you have to like what you're hearing from Dale Romans, and in a race without much speed on the front end, he could get an excellent trip next Saturday.