Share All sharing options for: Does racing need a Triple Crown winner?

Every year, as soon as we are finished watching the Kentucky Derby, we are inundated with countless questions as to whether this will be the year that we finally see a horse win the Triple Crown.  And as sure as the sun setting in the west, Joe Mainstream Reporter will feed us the standard line that horse racing needs a Triple Crown winner and how that alone will lift the sport from its inevitable abyss.

If Super Saver were to go on and win the Triple Crown there would obviously be an increase interest in horse racing and next year's Derby would probably be hugely successful and watched by even more people than this year's running.  And I have no doubt that NBC and Churchill Downs would benefit greatly from a Triple Crown winner (The Preakness and the Belmont Stakes would probably see a benefit, as well), but the sport as a whole would see negligible benefits, in my opinion.

There are several issues that are intertwined with the question as to whether a Triple Crown winner would "save racing", chief among them being the notion that horse racing is a dying sport that a Triple Crown win could save.  For the record, I wholeheartedly disagree with the notion that racing is a dying sport.  It's a sport that has its share of issues and problems, there is no doubt about that, but "dying" isn't the right word to describe the current state of affairs.

From the years 2000 through 2009, more money was wagered on horse racing in the United States than in any other decade, ever.  The structure of the game (both economically and operationally) has a multitude of problems but interest in horse racing, as measured purely by handle, is actually quite strong.  The last two years have seen huge hits to handle across the country but the last two years have seen huge hits to everything across the country, not just horse racing.  Industries that rely on gambling dollars don't do well in severe economic downturns (just take a trip to Vegas to see it first hand).

The graphic below illustrates the rise and fall of handle, races, and purses in the United States since 1990. 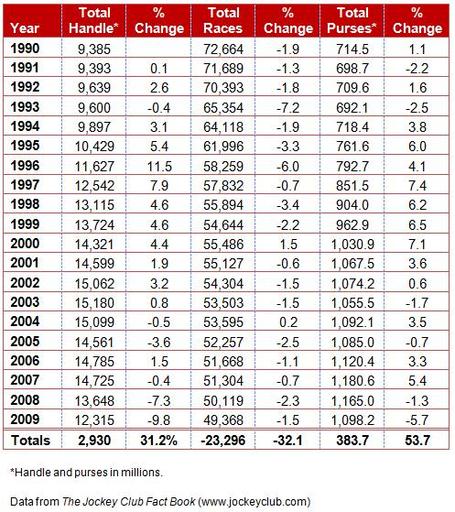 The totals in the above chart represent the increase (or decrease) between 1990 and 2009, and the corresponding percentage.

Something to keep in mind when looking at handle: those numbers do not include any wagering done through off-shore entities.  Given the proliferation of such companies in the last five to ten years it is likely that the handle numbers from the Jockey Club understate the amount of money currently wagered on horse races in the United States.

There is something else to consider when you look at handle figures: the cost of placing a wager on a horse race is essentially essentially the same as it was in 1994.  Sure, the price of admission has increased (although I don't believe it's risen comparative to other sports like baseball and football) but in its most basic form, the cost to place a bet has remained unchanged.  In 1994, I could go to the track and bet $2 win bets in every race and not spend more than $20.  In 2010, I can still go to the track and bet $2 win bets on every race and not spend more than $20.  Sure, there are more exotic bets like trifectas, superfectas, Pick 4s and 6s, Super High 5s, and anything else that tracks can think of, but the minimum bet is the same.  I think that is an important fact when talking about handle because it means that people are betting more not because it costs more to bet (i.e. - the minimum win bet went from $2 to $10) but because people are simply betting more.

So why are tracks and horsemen struggling when we see an increase in handle and in purses? One reason is the drop in on-track versus off-track handle.

Low on-track attendance all by itself wouldn't be such a problem for the industry if it wasn't for the fact that tracks get a bigger slice of the pie from on-track wagers as opposed to wagers on their track placed at another track, an OTB, or an ADW.  From 1996 to 2008, on-track handle declined by half while off-track handle grew at a somewhat similar rate.  In 1994, $2.9 billion was wagered on-track and $8.7 billion was wagered off-track.  By 2008, off-track wagering had risen to $12.1 billion but on-track handle had declined to $1.5 billion.  This fundamental change in wagering locations is a far larger detriment to the sport than the lack of a Triple Crown winner.  And while a Triple Crown winner would certainly generate some re-newed interest in the sport, it seems unlikely that it would create significant gains in on-track attendance at tracks around the country.

In today's racing environment, where we live in a world where I can wager on hundreds of tracks from the comfort of my TV room, people don't need to go to the track to wager so they don't, it's that simple.  Tracks that people still attend in large numbers (Keeneland, Del Mar, and Saratoga, to name three) face different financial realities than those that nobody sets foot on in order to place a wager.  The task that faces racing (and it's a huge task) is to determine what needs to be done so that a significant rise in handle, like we've seen in the past 18 years, acutally benefits the industry as a whole, instead of just a few.

A Triple Crown winner, while certainly good publicity for the sport, is irrelevant to resolving the economic model that is the current cause of the financial problems within the game.