If we simply examine the Triple Crown races by their recent history we could probably paint the first two legs in broad brush, general terms.  The Kentucky Derby is a twenty horse free-for-all that can trigger boxcar payouts across the board.  The Preakness as a fairly formful race where the low-priced horses tend to win more often than not.  As for the Belmont Stakes, well, it's hard to peg this race into any predetermined category.  We've seen huge long shots win this race (Da' Tara, Birdstone, Sarava), and we've seen the chalk bring it home (Afleet Alex, Empire Maker, Point Given), and pretty much everything in between.

The table below summarizes the median, high, and low pari-mutuel payouts in the Belmont Stakes over the last ten years.  I have also included an additional table near the end of the post summarizing the past ten Belmont winners and their corresponding Beyer figure.

The excel file with all of the raw data for the Belmont payouts (as well as the Derby and the Preakness), can be found at the link below: 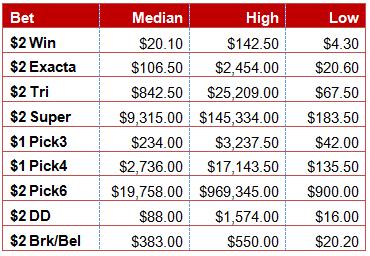 -Somewhat similar to the Derby, the Pick Six has produced some huge payouts over the last ten years, the largest being last year's sequence ending with Summer Bird's win in the Belmont.

Da' Tara's upset of Big Brown triggered a Pick Six carryover and a payout of $1,100 to players holding five of six.

-The median win payout of $20.10 is certainly a healthy number; can't really complain if you're getting 8/1 on your Belmont winner.

-The Sarava year, due to the insane 70/1 payout on the winner, produced the highest Exacta, Trifecta, and Superfecta payouts in the last ten years.  Belmont didn't offer a Pick 3, 4, or 6 that year.

Oddly, the Acorn/Belmont daily double  following Sarava's win only paid $348.50, a tidy sum but certainly not the highest DD in the last ten years. 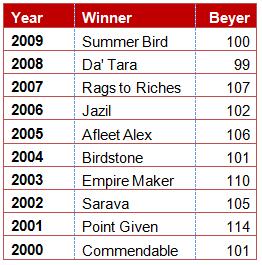 -If we simply look at the past ten Belmont's in terms of Beyer numbers, Point Given is clearly the best of the bunch, an assessment that seems pretty accurate.  Empire Maker, Rags to Riches and Afleet Alex round out the top half of the last ten winners.

Sometimes I look at Beyer numbers and feel like they don't really capture the quality, or lack thereof, of the winner of a race.  And then there are times where they seem to be right on the money.  If you were to rank the last ten Belmont winners solely by Beyer numbers, I think they'd be pretty close to right on in terms of determining quality.  We might be able to quibble here and there, but Point Given on top and Da' Tara on the bottom seems about right.