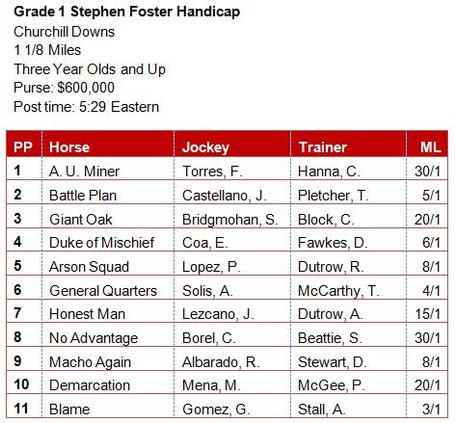 Rachel Alexandra and Zenyatta will draw most of the attention this weekend, but it's the Grade 1 Stephen Foster at Churchill Downs that will be the premier race in the country.

-Trainer Tom McCarthy indicated that General Quarters would point toward the Arlington Million following his win in the Woodford Reserve Turf on the Kentucky Derby under card.  Whether that remains their ultimate goal this summer remains to be seen, but they'll put him back on the dirt on Saturday where he hasn't won a race since the Grade 3 Sam F. Davis since March of 2009.  He did run 2nd in back-to-back graded stakes races at the Fair Grounds earlier this spring.

-Macho Again ran 2nd to Rachel in the Woodward but has flopped badly in every race since...and he hasn't been within 9 lengths of the winner in his last three starts.  (I've got a post in the hopper about the Woodward that I hope to have up later today.  In short, the horses that ran that day have come back to do almost nothing since.)

-Battle Plan took a little time to get his career going (only two starts before he turned five) but Todd Pletcher has him rolling right along.  He defeated General Quarters in the New Orleans Handicap in his last start and has led every step of the way in his last two races.  He's the only horse in this field that wants to run on the lead and that should be a huge advantage.

-Blame has been on fantastic form every since he broke his maiden at Keeneland during the 2008 fall meet, never finishing out of the money in any race of his career (9-6-1-2).   With the lack of speed to challenge Battle Plan in the early going he will probably have to sit awfully close to the lead to have the best opportunity to win.  He does love the track (3-2-0-1) and the distance (4-3-1-0), so perhaps that will be the difference in this race.

If we are looking at other possibilities, Duke of Mischief could make some sense.  He's shown some tactical speed in previous races and with the lack of speed in this race he should be well placed early.  His last race where he won the Oaklawn Handicap was a pretty impressive race and he appears to be in excellent form.