Share All sharing options for: How good was the 2009 Woodward?

There's been a bunch of speculation as to why Rachel Alexandra has yet to run back to her phenomenal form of 2009.  A majority of the answers have centered around fitness, specifically that the long campaign and the taxing Woodward (her last race of 2009) took a toll on the champion filly.  Many people argue that Rachel hasn't been the same since the Woodward.  I would suggest that she hasn't been the same since her race prior to the Woodward, the Haskell.

Rachel was clearly the best three year old filly in the nation; she proved that by decimating any filly that dared to challenge her during 2009.  None of the other three year old fillies could get close enough to Rachel to read the words on her saddle cloth as she won her last three races against the girls by 8¾, 20¼, and 19¼ lengths.

Rachel was also clearly better than the best three year old colts in 2009, first dispatching Derby winner Mine That Bird in the Preakness, and then easily defeating Belmont winner Summer Bird in the Haskell.  Much like the three year old fillies, the colts couldn't even threaten her.  Sure, she had to work a little harder in the Preakness, but does anyone really think Mind That Bird was going to get by her in the lane?  It seems doubtful; Rachel was clearly the best.

Things began to change for Rachel when she ran at Saratoga as the Woodward was the first time in her career where she ran in something other than an age restricted race.  Up until that day she had never competed against a horse that was older than her, male or female.  The Woodward, however, is such a perplexing race in the career of this great filly as not only did she arguably run the hardest, most grueling race of her career in order to win, but she won it against a field of horses that has been less than stellar in the months since.

Horses that ran in the Woodward are 1-for-23 since that race, with the only win coming in a 100k Optional Claimer/N$Y event by Cool Coal Man.  And not one horse in that field has come back to win a graded stakes race (although that should change tomorrow where it seems unlikely that Rachel will lose for a 3rd time in a row).  Furthermore, not only have Woodward horses not been winning, but several have run flat out awful races since that time, including the runner-up, Macho Again, and the third place horse, Bullsbay.

Below is a summary of the placing of every horse from the Woodward since that race along with their Beyer figures. 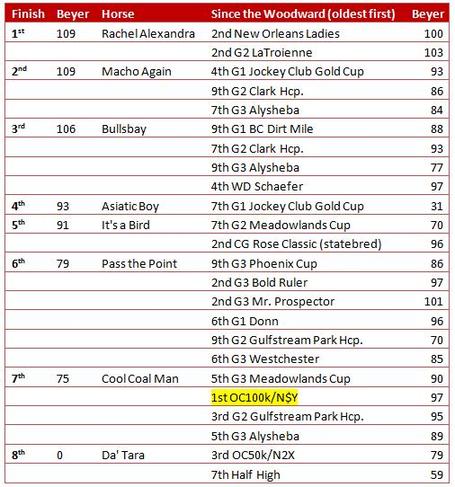 Not only does it appear that the Woodward was an average race (at best),  I think you can make the case that the Beyer assigned to Rachel Alexandra's performance is a bit high.  Macho Again hasn't come anywhere near that figure since that time.  Ditto for Bullsbay and Asiatic Boy.  It's a Bird eclipsed his Woodward number in a listed stake for state-breds at Calder.  In fact, the only horses that have run equal to or past their Woodward figures are the ones at the very back of the field: Pass the Point, Cool Coal Man, and Da' Tara.  Pass the Point has performed the best since the Woodward but has done all his work in sprint races; any time he tries to go more than a mile he gets blown away.

(On a slightly unrelated note: how bad of a Belmont winner has Da' Tara turned out to be?  Not only was his Belmont one of the weakest in the last twenty years (at least until last Saturday's), but he's done nothing in his career since.  He's run nineteen races in his career and won two of them: a Maiden Special Weight and the Belmont Stakes.  Talk about a fluke winner!  Is Da' Tara even in training anymore?  I did a quick search for him and came up with a big zero.)

At the end of the day, whether or not Rachel ran a 109 in the Woodward is irrelevant.  What is relevant is that she was all out to beat what has turned out to be a mediocre group and she hasn't been able to move forward since.  Furthermore, when we assess the strength of that race based on how those horses have performed in their races since, it's difficult to conclude that this was a deep or talented field.  Perhaps the Woodward took a lot out of every horse in the race.  Or perhaps the field, with the exception of Rachel Alexandra, wasn't that strong to begin with.