Zenyatta: Passing 100 from last to first

Share All sharing options for: Zenyatta: Passing 100 from last to first

Zenyatta has raced 17 times in her career and has won all seventeen races.  Because of her closing running style, she was dead last after a quarter mile in 14 of those races.  The other three times she was 2nd to last.

In her career, Zenyatta has passed 100 horses en route to her 17 wins.  The only three horses that she didn't pass (because they were already behind her) were Mind That Bird (2009 BC Classic), Life Is Sweet (2009 Lady's Secret), and Modification (2009 Vanity). 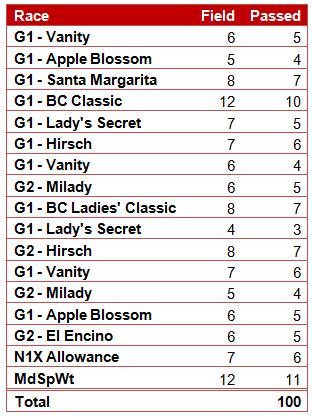 Below the jump you can find the video replay of Zenyatta's 1st career victory on November 22, 2007, in a Maiden Special Weight event at Hollywood Park.  It's rare that you see a racehorse that runs the same way every single time (and with success), but Zenyatta (so far) has done just that.