Share All sharing options for: 2010 Royal Ascot: Quality from start to finish

One of the more attractive aspects of European racing is the concentrated nature of both the individual meets and the races within them.  Here in North America, much of our racing, even at our biggest meets (Keeneland, Del Mar, Saratoga) involves a litany of claiming and maiden races.  The top meets in Europe, however, are jammed full of top class racing on every day.

Royal Ascot couldn't have picked a much better way to kick off their 2010 meet as the first race on the card is the Group 1 Queen Anne Stakes, featuring one of the best mares in the entire world, Goldikova (IRE).

Below are the events scheduled for day 1 of Royal Ascot.

The course is rated as Good (good to firm in places).

It's traditional in Europe to list the races according to their post time as opposed to race 1, race 2, etc.  Today's first race is scheduled to run at 2:30pm local time (9:30am Eastern / 6:30am Pacific).

For anybody that is unfamiliar with the layout of the course at Royal Ascot, the graphic below should give you a better idea. (click on the diagram for a larger image.) 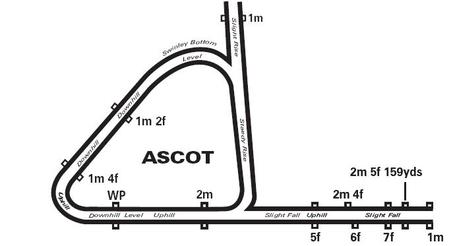 Most of the mile races are run on the straight and will start from the far right of of the course.  Notice the description on the diagram that indicate whether that section of the course is uphill or downhill.  Other than the downhill turf course at Santa Anita, which is only used for 6 1/2 furlong sprints and marathon turf races, no other major track in North America features an increase or decrease in elevation during a race.  A mile race on the straight at Royal Ascot, however, will feature a "slight fall, uphill, slight fall, uphill, and downhill" over the course of the race.

Here's a look at the today's six races, based on my rudimentary techniques for handicapping European races:

For me, this is the "must see" race for the simple fact that it features the high class mare, Goldikova (IRE).  Timeform rated her last three races at 141+, 139+, and 131.  The 139+ was earned following her win in the Breeders' Cup Mile at Santa Anita last November.

In terms of ratings, Rip Van Winkle (IRE) and Paco Boy (IRE) are the only other horses in this field that really come close to Goldikova.  Rip Van Winkle earned a 143+, 148+, and 148 in his last three European starts of 2009 but he's been off since his lackluster performance in the Breeders' Cup Classic (108).  Paco Boy won this race last year and is 2-for-2 in 2010, but he appears to have drawn a much tougher field this time around.

This sprint race looks to be one of the most competitive events on the opening day card.  The Australian shipper, Nicconi (AUS), figures to be one of the betting favorites by the time this field goes to post after winning a Group 1 race six months ago.  Timeform indicates that he will be "visored" for the race, which I assume means the same as "blinkers-on" here in the States.  If that's the case, it seems that trainer David Andrew Hayes believes he'll need some extra speed to come out on the winning end of this one.

Sir Michale Stoute's Kingsgate Native appears to be the other prime contender in this race following a win in his first race of 2010.

Borderlescott is a consistent colt that finished 3rd to Kingsgate Native at Haydock in his last start.

The St James's Palace will be run at a mile but "on the round" as opposed to on the straight, like the Queen Anne Stakes.  Running around a turn might be the only thing that American Noble's Promise will recognize when he leaves the starting gate in this race...although that also might not look familiar as this race will require him to make a right turn for the first time in his career.

Noble's Promise is a decent looking colt and it certainly makes sense for him to cut back to a mile and make an attempt to run on the lawn.  However, his connections have picked an awfully tough spot for him to try and make a splash at Royal Ascot: Canford Cliffs (IRE) just won the 2000 Irish Guineas, Makfi (GB) won the English 2000 Guineas, and Dick Turpin (IRE) was the runner-up in both the English and French 2000 Guineas.  Those three alone are probably too much for Noble's Promise to handle.

I haven't got much of a clue as to how to even assess this race, but I certainly like the breeding on the Goldolphin horse, Roayh.  Sired by 2004 Breeders' Cup Sprint winner Speightstown out of a Marquetry mare, Roayh has some serious speed on the top of his pedigree and the turf all over the bottom half.  (Check out Roayh's pedigree at PedigreeQuery.com)

I don't know if this colt has any chance to win (his ratings aren't particularly high), but you can't help but love the pedigree.

Ghimaar appears like to be the betting choice, even though this distance is much farther than he's run in his last six races.  Tyrrells Wood (IRE) has run 21 and 22 furlongs in his last two starts, both of which resulted in 2nd place finishes and earned him a 108 and 100 rating for each of those efforts.

The last race on the card features the other American runner, Wesley Ward's Metropolitan Man.  Ward won this race last year with Strike the Tiger (ridden by Johnny V.) and it doesn't look like he's is going to sneak up on anybody in this year's race as both Timeform and Betfair have tabbed Metropolitan Man as the one to beat.

If you simply look at his maiden breaking win at Keeneland on April 22nd you can't help but think that Metropolitan Man has a huge shot in this race.  Not only did he simply crush the field by 7 1/4 lengths, but the runner-up, Changing the Rules, won in his next start in a Maiden Special Weight at Churchill Downs over the main track.  Changing the Rules picked up an 88 Beyer in the process, a solid number for a two year old colt this time of year.