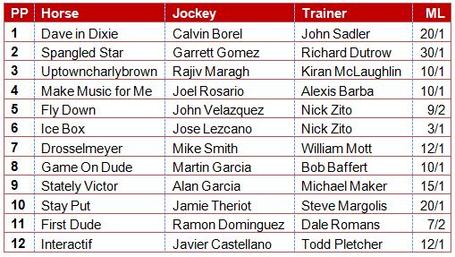 A few thoughts on the field and the morning line:

-First Dude at 7/2 feels about right, given the expected pace scenario.

-Interactif at 12/1....eh, I like this horse a bit but certainly not at 12/1.  Give me something like 20/1 and we can start talking.  I don't think the transition from synthetic/turf to dirt will be an issue as he handled dirt pretty well as a two year old.  I am, however, concerned that his class is just a blip below the rest in this field.

-Make Music for Me at 10/1 looks pretty solid if you believe that his good form in Kentucky was due to his talent and not just taking to an off track.  If that performance was due to the slop, then I think he would belong at 20/1 or higher.

-I don't care for Stately Victor at 15/1 as I'm just not sold on this colt.  Honestly, it's tough for me to back a horse that has only run well in the Blue Grass since he broke his maiden, and that race has had some odd results the past few years.

Stately Victor didn't run horrible in the Derby and a step forward from that race would certainly put him in contention with this field, but I won't be backing him come post time.  If Stately Victor beats me, so be it.

-Spangled Star was pegged as the longest shot on the board by the Belmont odds-maker, at 30/1.  I could go either way on this colt: he's got the pedigree to suggest that he's going to love the extra ground but he hasn't done a whole lot to distinguish himself coming into this race.  He seems like a horse to use in the exotics in case he runs big.

-Stay Put might make a decent play on Saturday, especially if it were to rain (about a 20% chance of thunderstorms).  He's generally a stone-cold closer except when the track is wet, then he's running right up near the lead early on.  If the track stays dry he still might warrant a bit of a shot as a value play.  He closed into slow fractions in both of this races at the Fair Grounds this spring and will probably have to do that again to win.

Stay Put is a colt that will be tough for me to ignore if he's around 20/1.