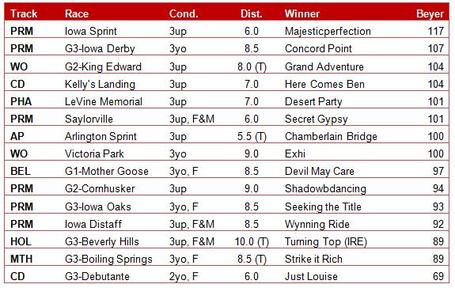 -Majesticperfection proved he is the real deal when he crushed the Iowa Sprint on Friday night in 1:07.24 (a new track record) and earned a 117 Beyer.  That performance stamps the Asmussen trainee as a contender for the Breeders' Cup Sprint this fall.

Check out the internal fraction for Majesticperfection in this race: 21.53, 21.95, 11.63 and 12.13; he was simply blistering in the early part of the race and simply ran every other horse into the ground.  Atta Boy Roy, who has run a couple of very nice races at Churchill Downs prior to the Iowa Sprint, tried to keep up with the winner but was well-beaten every step of the way.

The most surprising result of this race was that the crowd didn't hammer Majesticperfection all that much at the windows, as he went off at odds of 3/1.  I figured those last two 100+ Beyer races would have caused his odds to end up much lower but he actually went off as the 3rd choice in a field of seven.  We won't see that any time soon with this colt.

-By virtue of winning the Arlington Sprint Handicap at 5 ½ furlongs on the turf, Chamberlain Bridge has earned a spot in the Breeders' Cup Turf Sprint, should his connections be willing to pay the fees to enter him in the race.

-Concord Point ran away from the Grade 3 Iowa Derby field on Saturday night, beating Thiskyhasnolimit by 8 ½ lengths, and Winslow Homer by 9 ¼ .

-Connie and Michael ran a valiant race and tried to give Devil May Care all she could handle but in the end John Velazquez had plenty left in the tank to win the G1-Mother Goose by a comfortable 1 ¼ lengths.

The pace was fairly honest in the Mother Goose when you consider there was only a field of five (45.59, 1:09.92), but none of the fillies other than Devil May Care were able to withstand the early speed and still come home fast enough to take the top spot.