If you are looking to dip into a tough Pick 3, Pick 4, or Pick 6 sequence this weekend, then Belmont Park looks to be the track for you.  The Friday card is light on stakes races but if you like races over the lawn there are five to choose from on the day.  Saturday's Belmont Stakes undercard is full of high-level racing with six stakes races, including the Grade 1 Just a Game, Grade 1 Acorn, and Grade 1 Manhattan Stakes.

Below are the post times and race schedules for Friday and Saturday: 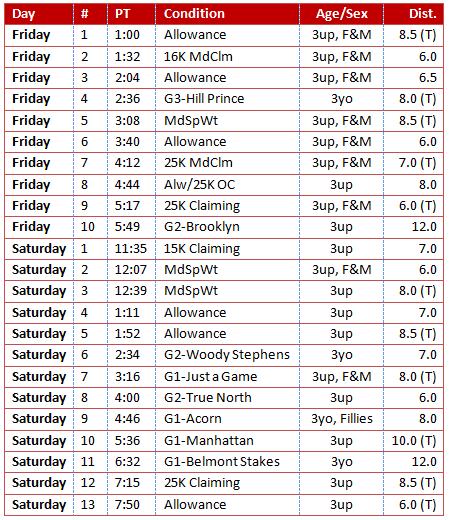 Some thoughts on Saturday's Pick 4 below the jump...

The Pick 4 sequence ending with the Belmont looks like it is going to be an absolute bear to tackle.  The G2-True North has a field of 10; the G1-Acorn, 13 horses; the G1-Manhattan, 11 horses, and the G1-Belmont, 12 horses. With deep, competitive fields in every race there are plenty of combinations to choose from.

The first leg of the Pick 4, the True North is about as competitive of a sprint race as you'll see.  Given his form over the Belmont main track, I would expect Bribon (FR) to take a good deal of betting action even though I think this race might be a little less ground than this colt wants to run.  Custom for Carlos, however, should love six furlongs at Belmont after putting up a big performance in the Grade 3 Count Fleet at Oaklawn in early April.

I pulled up the past performances for the Acorn last night and spent about ten minutes looking at the overabundance of speed horses jammed into this field.  Trying to make sense of it all was a task unto itself.  One things appears certain, all that speed should help the fillies that like to come from off the pace, such as Buckleupbuttercup. Seeking the Title, and Dances With Ashley.  Of those three fillies, Buckleupbuttercup has the most appeal to me given her improving form and the presence of Jose Lezcano in the irons.

Gio Ponti is the headliner in the Manhattan, but this will be his first start after running in the Dubai World Cup in March; it certainly wouldn't be a shock if he wasn't at his best in this spot.  The same could be said for Take the Points, who will make his first start since running in the Dubai Duty Free.  If either of those two colts are off their game then this race could be wide open for an upset.

One of the more intriguing entries in the Manhattan field is Pinckney Hill, an Angel Penna trainee that at first glance seems badly outclassed by this field.  And while he doesn't have the graded stakes success that the rest of the field has, Pinckney Hill possesses a several attributes that make him an interesting bet.  First, he's got a good deal of tactical speed which should be an advantage in a race with a possible soft pace.  Second, he's bred to love going a mile and a quarter; he might show dramatic improvement with the added distance.  And finally, over the last five years, Angel Penna is 11-for-38 (29%) in graded stakes races with 55% of his runners finishing in the money.  Penna wouldn't be entering Pinckney Hill in this race if he didn't feel he had a good shot at success.