One of the things that makes the Belmont Stakes such a different race from the Derby and Preakness (beyond the mere added distance) is the stark difference in the manner in which the race is run.  The Derby and the Preakness will usually see extremely contentious pace scenarios with horses running early fractions that drive much of the field into the ground.  While the Belmont is the complete opposite and where seeing six furlongs run in 1:12+ is commonplace.

This year's Belmont appears (on paper) to be a race that will produce a relatively slow pace situation, which caused me to wonder how the fractions have broken down for past Belmont's and whether we could identify any historical trends.

Below is a table summarizing the pace for the last twenty editions of the Belmont Stakes.  I've included which horse was in the lead after a mile (and where they finished), and where the winner was after at that same point in the race.

You can click on the table for a larger image. 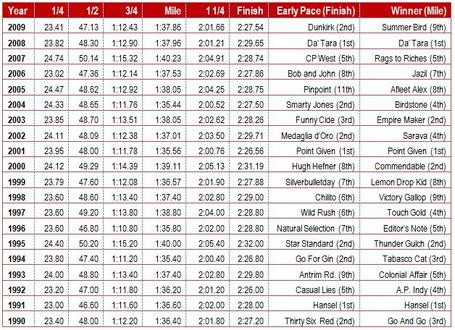 I don't know if the data gives us any hard and fast conclusions of the best way to win the Belmont, if anything, the last twenty years appears to suggest that a horse can win from just about any position on the track.  Here's a few things that caught my eye after reviewing the numbers:

-Even though it's very hard for a horse to win the Belmont going wire-to-wire (only 3 times in 20 years), the early speed does appear to do relatively well.  The horse leading after a mile has finished in the top 3 ten times in the last twenty years.  That surprised me as I would have predicted that number to be a lot lower before looking at this data.

-Is it any wonder that Smarty Jones ran out of gas in that final 1/4 of a mile?  He ran the second fastest mile and a quarter in the last twenty years.

-You really have to appreciate the performance that Point Given put up in 2001.  He did all the dirty work on the front end and ran crushing early fractions in the process, running the first mile in 1:35.44.  Compare that to our last wire-to-wire winner, Da' Tara, who ran the first mile in 1:37.96.  A brilliant performance by Point Given that day.

-Natural Selection ran the first six furlongs of the 1996 Belmont in 1:10.80...where in the world was that horse going?

-When you look at the list of winners and their position after a mile, you really get a sense that any running style can win this race.  We've seen closers, stalkers, mid-pack, and early speed horses all win in just the past 5 to 7 years. Early speed has done well at times but we've also seen early speed that walked through the opening six furlongs yet still was unable to finish in the top 3.

Perhaps the only takeaway from this information is that pace isn't a huge factor in deciding the Belmont, at least not in the way it is in the Derby and the Preakness (which is probably stating an obvious fact, but it's important, nonetheless).  If a horse isn't cut out to get a mile and a half on the dirt, it's probably irrelevant as to how fast or how slow the pace is.