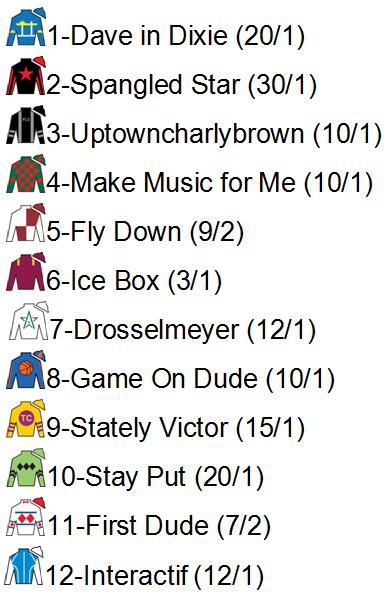 The 2010 Triple Crown season that started all the way back in January with the Fly By Phil winning the Tropical Park Derby at Calder, and progressed through an assortment of races and tracks across the country, comes to a close today with the running of the Belmont Stakes.

I think it's safe to say that unless we see an brilliant performance in the Belmont we aren't very close to determining this year's champion three year old.  Super Saver and Lookin At Lucky have tossed their names into the ring with their Derby and Preakness wins, but they are by no means far ahead of the rest of the pack in terms of accomplishments.  It's likely we won't have a front-runner for the divisional honors until we get to the Haskell and the Travers later on this summer.

Beyond the race for champion three year old, this Triple Crown season has been extremely competitive, even it if was light on top-notch performances.  You could make a case that with the exception of Eskendereya's big wins in the Fountain of Youth and the Wood Memorial, the majority of the three year old stakes races in 2010 have resulted in a collection of good to middling performances.  It's been a tightly bunched group of colts where you can really make a case for almost every horse that makes his way into the starting gate; no one is a monster, no one is a huge standout.  Today's Belmont is no exception; Ice Box and First Dude appear to be the class of the race but given how this whole Triple Crown season has played out, I don't think it'd be a shock for any of these to take top honors.

You can find all of today's results and parimutuel payouts in the following excel file: 2010 Belmont Results

If you are looking to get in on a little just-for-fun handicapping contest, put up your picks for races 4 through 11 over at JP Fanshawe's contest post.