The odds below were pulled from the Wynn Las Vegas Race & Sports Book.  Click on the link below to view the entire file, which includes futures for the Classic, Ladies' Classic, Dirt Mile, and Sprint.

Below is a chart with the top 10 horses based on current future odds, and some notables. 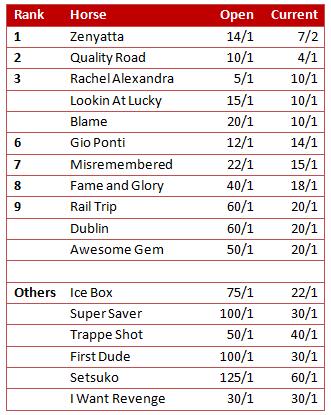 A few thoughts on these updated future odds below the jump.

-Not much value if you're looking to put a future wager down on Zenyatta or Quality Road, but those odds make sense from a current form perspective.

-I'm a bit surprised that Rachel Alexandra has stayed in the 10/1 range.  I think she makes sense right now as a third choice in a future wager but I'd have expected to see her in the 6/1 or 5/1 neighborhood.  If you like Rachel and you think she's going to win the Classic, you should be jumping all over these odds as they are much better than anything you'll get on race day.

-Gio Ponti at 14/1?  He's probably won't even run in the Classic; taking those odds is like throwing your money in the shredder.

-Dublin at 20/1 is laughable beyond belief.  The fact that he's been bet down from opening odds of 60/1 makes me seriously questions some of the gamblers out there.  Perhaps Dublin will win the Classic (it's highly unlikely but certainly anything is possible), but the idea that somebody would take 20/1 odds on that proposition is ludicrous.  Unless Dublin wins the Haskell and the Travers in the next two months (another highly unlikely proposition), a player would get much higher than 20/1 to win on him the day of the Classic (assuming Rachel, Zenyatta, and Quality Road were to all enter the race).

I supposed I should be pleased to know that there are people out there that will take a 20/1 future bet on Dublin for the Breeders' Cup Classic because it gives me hope that you can still exploit the crowd.  On the other hand, I can't fathom anyone placing a win bet on this colt in the biggest race of the year when he hasn't found the winner's circle since he was a juvenile.

One final Dublin fact: he hasn't had a published work since the week after the Kentucky Derby.

-While Dublin at 20/1 is a laugher, Trappe Shot at 40/1 and Rail Trip at 20/1 are both in that "could be decent value" range.  The risk is a little greater with Rail Trip in that he needs to prove he can make a surface switch, but with his transfer to Richard Dutrow and his shipping east, he's going to get every opportunity to prove himself on dirt prior to the Classic.

-Ice Box at 22/1 and Super Saver at 30/1 are still intriguing plays to me as both of those colts have shown that they like the Churchill Downs surface.  Ice Box was 30/1 the last time I looked at these odds, so he's obviously receiving some action.

-I Want Revenge at 30/1 is a bit of a risk, but if he can round back into form in the latter half of the summer, that could be a decent play if you're an I Want Revenge fan.