A friend of mine and I were out at our local watering hole last night going over today's Form when he mentioned some peculiar payouts he'd been noticing at Emerald Downs with the early Daily Double.  I haven't been playing Emerald all that much in recent weeks so I hadn't noticed any strange results.  His point was that even when a low priced horse came home in one of the two legs that the Double was still paying out at pretty generous odds.  This morning I decided to pull out the result charts from the last month to see if he was right.  Turns out, he was.

The chart below summarizes the $2 Win payouts of the first two races at Emerald Downs over the last month, along with the $2 Daily Double payout, odds on the first two winners, the odds return on the Daily Double, and what you would have received if you had taken your winnings from the first race and simply pressed it onto the second race winner.  Payouts in yellow indicate which bet (Daily Double or the parlay) paid higher. 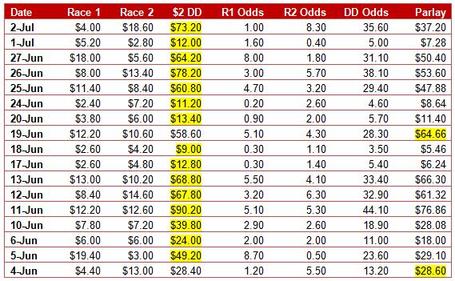 As you can see by the chart, only twice in the last month would you have made more money by simply parlaying your race one winnings into a race 2 win bet.  Every other time the early Daily Double produced a better payout.  That is not all that shocking in and of itself; we should expect to find that relationship at most tracks on most days.  What I was surprised by is exactly what my friend had indicated in our conversation: that the early Double paid much better than the parlay on several occasions.

On June 17th, the winners of the first two races of the day at Emerald went off at odds of approximately 3/10 and 7/5.  The Daily Double returned $9.00, a pretty weak amount.  However, when you compare that with what you would have received if you had simply rolled your race 1 winning onto the race 2 winner ($5.46), the Double is shown to have much more value.  Last night's early Daily Double produced a fat $73.20, almost double what you would have received had you pressed your $4.00 winning from race 1 onto the 8/1 winner of race 2.

Another thing you notice on that chart is that there isn't a single horse winning at odds of 10/1 or higher and yet, there are still some decent payouts.  In fact, even if you're playing low priced horses, and you're able to hit the Double, you're bringing back decent value.

Races at Emerald can get quite chalky at times, a product of small fields and a racing surface that at times can play heavily towards any horse that is able to run near the lead early on.  The early Daily Double, at least recently, is a bet where players can possibly find some extra value even if they aren't bringing home a life-changing score.