Mine That Bird returns...on the grass (Updated with results)

Share All sharing options for: Mine That Bird returns...on the grass (Updated with results) 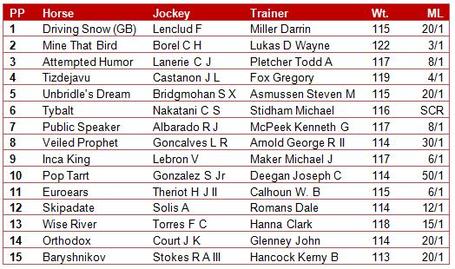 Happy Fourth of July!  I sincerely hope everyone has a safe and sane holiday celebration today.

In what has to be one of the oddest maneuvers of the weekend, 2009 Kentucky Derby winner Mine That Bird will make his first start of 2010 in the Grade 2 Firecracker Handicap, a one mile race on the lawn at Churchill Downs.  As you may have read in reports earlier this week, trainer D. Wayne Lukas wanted to enter the Derby winner in a allowance race on the main track, but when the race didn't fill he opted for a graded stakes race on the lawn.

Mine That Bird is facing several hurdles in the Firecracker, the first being that he's never run on the grass in his career.  He's had limited success running over a synthetic surface at Woodbine in Canada, but has never actually tried the grass.  Second, he's running in a race carded for a mile, a distance that seems much to short for a stone cold closer like Mine That Bird.  If he runs this race like he's run all the other in his recent career he'll be 10+ lengths behind the leaders before the field even gets into the first turn.  That's asking a lot of a horse in a race only going eight panels.  Finally, he's drawn into a full field of fourteen in which to make his lawn debut.  So not only will Mine That Bird has less ground to make his traditional last to first move, but he's going to have to get by thirteen other horses in order to do it.  That's a tough task.

The final insult to injury is Mine That Bird's turf pedigree; his sire, Birdstone, has yet to produce a winner a first time winner on the grass and his dam, Mining My Own, hasn't produced another horse to win a race other than Mine That Bird.

For all of these reasons, and for the fact that Mine That Bird is the 3/1 morning line favorite (way too low, in my opinion,  for a horse trying to overcome all of these hurdles) I'll be looking to beat the Derby winner in his return to the races.

There is a good deal of speed in the Firecracker so I'm looking for a horse that has shown an ability to come from off the pace successfully in races at a mile.  I was quite interested in Tybalt until he became a scratch this morning (Why do I always like the horses that end up scratching?), no now I find myself looking at a trio of big priced horses:

1-Driving Snow (GB) has only run twice in North America after beginning his career in Ireland; he just missed in the G3 Bourbon during the Keeneland fall meet in 2008 and then he came back to win the listed Oliver at a mile on the Indiana Downs turf course.  That's the last we've seen of this colt which suggests that he suffered an injury at some point last summer.  He's picked a tough spot to return and he'll probably need a race to be at his best, but at 20/1 on the ML (and probably higher at post time), I'm willing to toss him into the mix in the exotics to see if he can hit the board.

7-Public Speaker (8/1) appears to have enough tactical speed to keep him in the mix early on but he's also shown the ability to win by coming from just off the leaders.  He's solid at the mile distance (4-3-0-0) and he comes into this race off a solid performance in his last effort, the listed Opening Verse Stakes on this same track.

12-Skipadate (12/1) is a deep closer just like Mine That Bird, but unlike the Derby winner, this gray colt has proven that he can close from well back on the lawn and at a mile.  He's good at Churchill (4-1-2-0) and at the distance (5-2-2-0), so I'm not too concerned about him handling the going.  Skipadate is, however, a bit light on class; he's a solid allowance runner but hasn't shown a whole lot when he's tried to run against graded company.  Still, when you're a deep closer like this colt you're generally not going to be winning a lot of races unless the pace sets up perfectly for you.  In his last three races at a mile on the turf, Skipadate has run the final ¼ of a mile in 23.29, 22.55, and 23.54.

This looks like a fantastic betting race on paper and I'm going to take a swing for the fences and see what comes up.  I'll play the 1-7-12 above and below the 3-4-9-11-13 in two exactas at varying amounts depending on the will-pays:

Tizdejavu wins the Firecracker.  Mine That Bird is 8th and never threatens the winner. (Official chart).  Public Speaker was second followed by Inca King.