-The main track is listed as "FAST" with the turf "FIRM"

Both of today's turf sprints are on the Mellon (outer) Turf course, where the rail setting could certainly give speed an edge.  Races 1, 8, and 11 will be run on the Inner Course.  In total, there are six races scheduled for the turf today.

-The sixth race is a very nice Maiden Special Weight for two year olds that includes a Zayat Stables first time starter, 4-Justin Phillip (3/1).  Trained by Steven Asmussen, Justin Phillip is a son of First Samurai out of a Crypotclearance mare (Ava Knowsthecode) and a half-brother to Keyed Entry.

First Samurai won the Hopeful Stakes and the Champagne Stakes as a juvenile, while Keyed Entry won the Hutcheson Stakes and the Deputy Minister Handicap, placed second in the Gotham, and finished third in the Wood Memorial.

-Race 4 presents us with another reminder that there are no guarantees in the game of horse racing, especially if you're an owner shelling out big dollars at auction.

7-Bank Heist is a second time starter by Maria's Mon out of a Dehere mare (Candyturf), trained by Todd Pletcher and ridden by John Velazquez.  He's a half brother to two-time Breeders' Cup Sprint champion Midnight Lute and he cost a hefty $900,000 at the 2008 Keeneland September sale.  In his debut effort the crowd sent him off at odds of ½ only to see him finish seventh of eight horses, fifteen and a quarter lengths back.

I'm not writing off this horse or claiming that he won't amount to anything (I'd be surprised if he didn't run a much improved race today...check out that four furlong work at SAR last week), but it's one of the sobering and exhilarating parts of this game - money is important but you still never know until a horse sets foot on a track.

-Del Mar's juvenile Maiden Special Weight races have been a bit of a disappointment for me this meet.  There haven't been that many to begin with and the races that have been carded have featured somewhat so-so field, at least that's what they appear to be on paper.  On the other hand, Saratoga's Maiden Special's have been quite impressive.

-There were some rumors circulating around Del Mar this morning that trainer John Shirreffs was unhappy with the maintenance performed on the Poly this morning and that Zenyatta would be scratched.  If this Tweet from "TVGResearch" is accurate, then it appears that possibility has been put to rest.  But who knows. 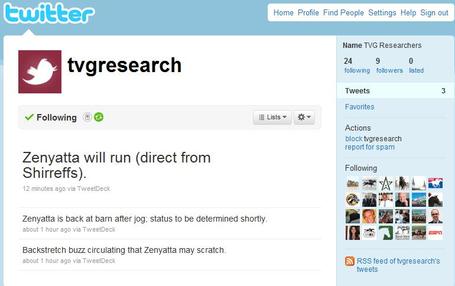