Zenyatta looks to make it 19-for19 in her final race before the Breeders' Cup Classic on November 7th when she faces five rivals in the Grade 1 Lady's Secret Stakes at Oak Tree on Saturday at Oak Tree at Hollywood (that sounds a bit strange, doesn't it?).  Two races later, Twirling Candy, the impressive (and controversial) winner of the Del Mar Derby, will tackle older horses for the first time in the Goodwood.  The first graded stakes race on Oak Tree's Saturday card is the Norfolk for juvenile colts and geldings and it will feature JP's Gusto, the impressive winner of the Hollywood Juvenile Championship, the Best Pal and the Del Mar Futurity in his last three starts.

I've created an excel file that has all the entries for Saturday's graded stakes races at Oak Tree Hollywood and Belmont Park, along with the morning lines for each race (currently only Belmont is available).  The link below will take you to that file.

Twirling Candy, should he opt for the Classic (which it appears that's what Sadler and the owners have in mind) is an peculiar horse to assess since he's shown a ton of talent running over both synthetic and turf surfaces but has yet to touch dirt in a race during his career  His success on both synthetic and turf isn't a hugely uncommon feat since we've seen, on average, turf horses transfer form to synthetic, and vice versa, better than dirt horses.  What we don't see a lot of, at least from my observations during the "Synthetic Era" (2007 to present), are horses that carry their form to all three surfaces equally.

If we could express a horse's ability to run on different surfaces, just from a top-of-the-head, big-picture perspective, I think the graphic below illustrates the relationship. 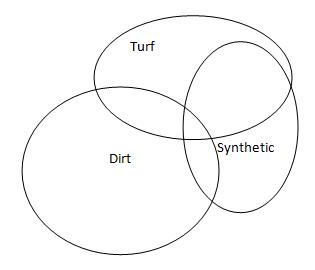 The dirt circle is the biggest since most horses run on dirt in North America.  Turf and synthetics are about equal size given the fact that there are only a few tracks that run synthetic meets and turf races are run only two or three times a day at tracks that actually have a grass course.  The overlapping sections represent horses that are able to transfer form from one surface to another.  The overlap between turf and synthetic is the greatest since the form of horses seems to transfer better between those two surfaces.

Right now we know that Twirling Candy fits into the big overlap between synthetic and turf as he dominated races a couple races on the ProRide at Hollywood before taking down a couple of stakes races over the Del Mar turf course.  And based on his pedigree, I don't think that's a shock to anyone; Twirling Candy has some fantastic grass influences on the bottom half of his pedigree his success when switched to grass was not unexpected.  Additionally, his sire, Candy Ride (ARG), has been known to sire a decent grass horse or two.

The key question for Twirling Candy, however, is can he move into that rare category of horses that perform well on all three surfaces?  It's possible he can (and if he does, how valuable of a breeding commodity does he become?) but it's also a big hurdle to cross.

Twirling Candy's stablemate, Sidney's Candy, the winner of this year's Santa Anita Derby and one of the favorites for last May's Kentucky Derby, was a stakes winner on synthetic, ran up the track in the Derby (which could have been related to the surface or the condition of the track) and then found even greater success when he was switched over to the turf.

Saturday's Goodwood won't answer the question of whether or not Twirling Candy can handle dirt in the Classic, but a big performance and a win would throw his name into the mix of contenders. At a minimum, Twirling Candy's inclusion in this year's Classic would add yet another speed horse to an already crowded front end.