-Big Drama runs his first race since winning the Breeders' Cup Sprint in the G3 Mr. Prospector at Gulfstream.  A heavily favored horse making his first start since the Breeders' Cup?  He might be the most likely winner but he's just as likely to be overbet in this situation (4/5 ML).

Speaking of overbet, check out the morning line for 1-Custom for Carlos (2/1).  I love this colt's races from last spring but the layoff since April 8th is a big hurdle to overcome in a tough field.  His morning drills have been phenomenal the past couple of months, so at least he appears to be fit following an extended break.  Of course, the bigger question is whether he'll be able to withstand what should be a torrid early pace up front.

-Blind Luck makes her 2011 debut in the El Encino on Sunday against seven other fillies and mares, including Champagne d'Oro, a filly I did not expect to see in this race.

Champagne d'Oro has made her living in the sprint ranks but will try two turns for the fourth time in her career on Sunday.  Of the other three route tries, two were flat out disasters.  She ran in the Breeders' Cup Juvenile Fillies back in 2009 and finished 12th, twenty-seven and a half lengths behind the winner.  She bounced back from that to break her maiden and then run 2nd, beaten only a half-length, in the Fair Grounds Oaks at two-turns.  From there she went to the Kentucky Oaks where she once again had a troubled trip and finished well back of the winner (11th, 21 lengths).

You can make a strong case that this filly has the potential to run a big race as long as she can get a clean trip.  Both her Oaks and Juvenile Fillies disasters saw her experience a bunch of trouble (she was a good five or six wide into the first turn in the Juv. Fillies and she was bumped and shuffled back in the Oaks), and she ran big when she got a clean trip at the Fair Grounds.  Throw in the fact that there isn't an over abundance of speed in this race and Champagne d'Oro should be ready to run a solid effort. 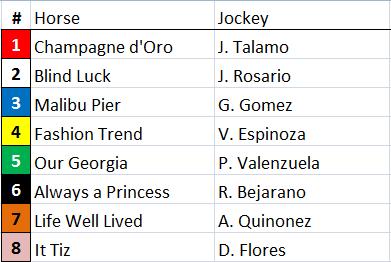 -Jessica Is Back, who will run in the Grade 3 Sugar Swirl on Saturday, had a somewhat strange 2010 racing season.  After middling around at the listed/restricted stakes level for a while, she went up against Rachel Alexandra in the Fleur de Lis at Churchill and finished a distant third, 12 ½ lengths back.  She came back in the Grade 1 Princess Rooney where she put up a very nice win over a big field, including eventual Breeders' Cup winner Dubai Majesty.  From there it appeared that Jessica Is Back was prepared to be a player in the Filly & Mare Sprint Division but she ran a disappointing 4th in the Grade 1 Ballerina followed by a troubled performance at the Breeders' Cup.  Her final numbers for 2010 were 12-5-4-1.  And while those numbers aren't bad for a year's work, she appeared to be capable of much more. 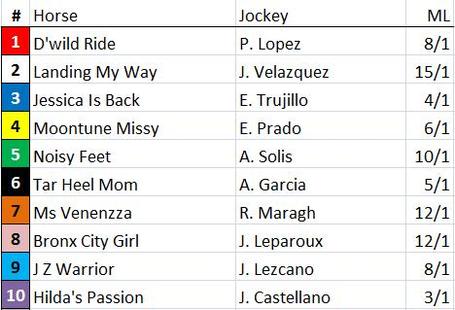 -Sidney's Candy, according to an article over at the Daily Racing Form, was initially targeted for his 2011 bow in the Grade 1 Kilroe Mile on turf.  Trainer John Sadler explained the change in plans:

"It was an audible," Sadler said of the San Fernando. "He came out of the race so well and breezed as well as a horse can breeze. He just looks great."

It also appears that the colt will in fact run in a blend of dirt and turf races throughout the season.

-There are five stakes races for three-year-old colts on the schedule this weekend (Jean Lafitte, Sham, Cal Derby, Dania Beach, and Smarty Jones) but only one will offer the all-important graded earnings needed for a spot at the Kentucky Derby, the Sham Stakes (which only drew a field of five).

At Golden Gate Fields, the ungraded California Derby drew a full field of twelve to contest the $100,000 purse prize.  11-Positive Response won the local prep for this race, the one mile Gold Rush Stakes, back on December 11th.  A gelded son of Pomeroy, Positive Response has led every step of the way in his last two races.  However, with his pedigree, you wonder how far he's really going to want to go.  The 8 ½ furlongs on Saturday shouldn't be a problem but that might start to test his limits.