Dialed In looks for more at Gulfstream on Friday

Share All sharing options for: Dialed In looks for more at Gulfstream on Friday

Friday's Gulfstream card features an extremely deep and contentious allowance event for three-year-old colts at a mile and an eighth.  Here's a bit of a look at the field: 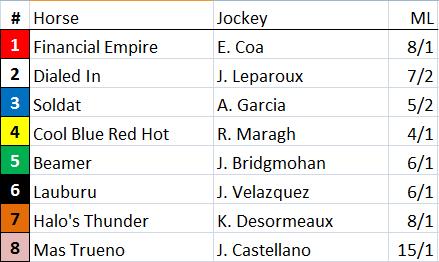 1-Financial Empire won his debut at Calder in mid-December (albeit in a race that is on the soft side).  He is one of two Todd Pletcher trainees in this race and he's clearly going to be the higher priced of the pair.

2-Dialed In is a Zito-trained son of Mineshaft out of a Storm Cat mare that he won his debut effort going 6 ½ furlongs at Churchill Downs back on November 12th.  That race has come back strong in almost every position on the board:

Two wins and four seconds by the rest of the field in their next starts suggest Dialed In exits a very good race.

I wrote a bit about Dialed In's debut win at Churchill Downs a couple of months ago.

3-Soldat ran 2nd to Pluck in the Breeders' Cup Juvenile Turf and now gets a chance to return to dirt where he finished 2nd in his first two career starts.  Neither of those dirt efforts were particularly strong but each came over an off-track (Good and Muddy/Sealed).  He's going to take a bunch action at the windows just due to his class, which certainly stands out when compared to the rest of the field, but his price might be a bit short given the surface.

4-Cool Blue Red Hot was a bit unlucky to lose his debut effort at Belmont on October 30th but he came back strong to score by an easy 3 ¼ lengths at Calder a month later.  He's come from well off the pace in each of his first two starts, a running style that might be at a disadvantage in this race due to the relative lack of speed throughout the field.

Carl Nafzger, trainer of Derby winner Street Sense, sends out 5-Beamer, a home-bred son of Vindication out of an Unbridled mare.  He ran a so-so fourth in his debut at Churchill in mid-November but came back to break his maiden at Tampa at the end of the year.

6-Lauburu, a son of Unbridled's Song out of a Mari's Book mare (Goulash), was a $925,000 purchase at the 2009 Keeneland September sale.  He won his debut race at the Big A back in mid-November against a field that has come back a bit soft - none of the horses that finished behind him have come back to finish in the top-3 in their next start.  Lauburu's greatest asset in this race appears to be his speed, something he might be able to use to run the rest into the ground.  The concern, however, will be the distance.  He's bred to love the nine furlongs but I wonder if he'll be ready to wire the field the very first time he attempts to go two turns.  Still, he might be an attractive play at 6/1 on the morning line.

Lauburu is a half-brother to two-time Elcipse Award winner Ashado, and Sunriver, winner of the Peter Pan, Hollywood Turf Cup and the Bowling Green Handicap.

Trainer Kenneth McPeek obviously has high hopes for 7-Halo's Thunder as he's entered him in three stakes races since his maiden breaking score at Turfway on October 2nd.  However, none of those three stakes turned out to be good races for this colt.  In the Grade 3 Iroquois he broke poorly and passed tiring horses to finish fourth.  In the Grade 2 Jockey Club he once again ran an even fourth.  In his last start he tried the turf in the Tropical Park Derby on New Year's Day, where he ran near the back of the pack the entire way around the course.

8-Mas Trueno broke through for his maiden score back on November 21st at Philadelphia Park (er, Parx...whatever) after two previous tries at Delaware and Monmouth.  A son of Preakness and Derby winner Afleet Alex out of a Tabasco Cat mare (Cateress), Mas Trueno will make his first start for trainer William Phipps after running his first three races for Afeet Alex's former trainer, John Servis.

I loved Dialed In's debut at Churchill but he's probably going to need to be a lot closer to the pace in this race than he was in that one.  On the other hand, he's shown a ton of speed during his morning drills, including bullets in his last two moves.  Zito doesn't normally win with first time starters (10% over the last five years) but this colt was absolutely ready to fire in his debut.

I'm expecting Dialed In to show much more speed in this spot which could give him a nice advantage over his competitors.  I'll take Dialed In on top with Lauburu underneath.