First Dude will attempt to finally pick up the first non-maiden win of his career in Saturday's Sunshine Millions Classic at Gulfstream Park.  Since his maiden breaking win at Gulfstream at the end of January 2010, First Dude has finished 2nd four times and 3rd another four times.  He helped set the pace in the Breeders' Cup Classic only to fade to a well-beaten 8th.

If  First Dude attempts to use an early speed style in this race he'll once again find himself with company up front as both Tackleberry and Birdrun both prefer to run up front (Tackleberry has the best speed of the two and will likely be the leader heading into the first turn).  On the other hand, a lot of the horses in this field prefer winning from off-the-pace which could give First Dude an advantage if he were to employ a stalking style.

Duke of Mischief picked up three graded stakes win sduring 2010 and that alone gives him a big edge on this field.  His win in the Grade 3 Fort Lauderdale was an off-the-turf affair but the Grade 2 Oaklawn Handicap and the Grade 3 Iselin both came at the same distance as the Classic.

Jerry Hollendorfer's Honour The Deputy is one of the more intriguing entries in the Classic field.  This four-year-old gelding by Honour and Glory has just four starts under his belt but he's run credibly in all four and looks ready to step up to stakes quality competition.  He's come from well back in most of his races but he doesn't have a tremendous turn of foot when he begins to make his run; Honour The Deputy is much more of a grinder.

Johnny V. grabs the mount on Honour and Glory for the first time on Saturday. 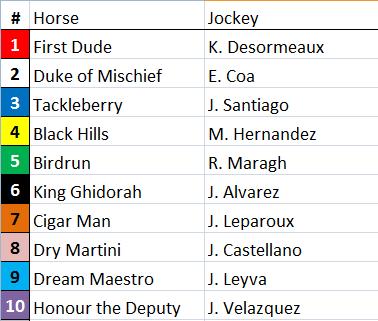 Entires for the rest of the Sunshine Millions races at Gulfstream and Santa Anita can be found below the jump.  Some of the more notable names on the card are: