UPDATE 9:55 AM: The Daily Racing Form's Mike Welsch, who covers Gulfstream Park, noted that the main track was very fast this morning during workouts.

Also, so far no changes in the Holy Bull.

ORIGINAL POST: If you were a bit disappointed in the field for last weekend's Lecomte Stakes at the Fair Grounds, you're rewarded with a nice field in today's Grade 3 Holy Bull Stakes at Gulfstream Park.  Below is a look at the field for today's race. 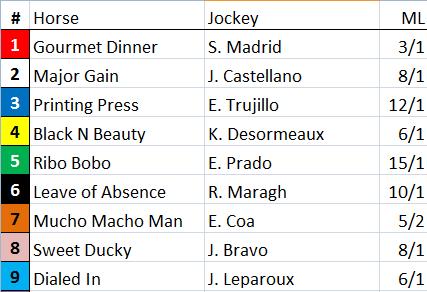 1-Gourmet Dinner has more than likely secured enough graded earnings to make it to the starting gate in the Derby after his win in the Grade 2 Delta Downs Jackpot in late November, and he'll be looking to rebound from a disappointing fourth at Hollywood in the CashCall Futurity last time out.  The CashCall was his first attempt over synthetics, and while he ran a decently that day he's probably due for a bit of improvement upon his return to dirt.

2-Major Gain started his career with three straight races on Poly - two at Arlington and one at Keeneland.  He transferred to dirt in the Grade 2 Kentucky Jockey Club at Churchill in late November where he was a hard luck 3rd to Santiva and Astrology in a three-horse dash to the wire.  The pace didn't flatter his running style that day (49.03 for the half, 1:14.25 for six) but he was still able to make a strong move on the turn to put himself in excellent position to win the race.

3-Printing Press tried graded stakes company for the first time last September at Monmouth Park where he ran poorly and finished 7th of eight.  Most recently he was second to Black N Beauty in an N1X Allowance race at Gulfstream on January 7th.

4-Black N Beauty figures to be part of the early pace scenario after a wire-to-wire win last time out and he could get things his own way if he's able to break cleanly and separate himself from the field.  If you like Printing Press at all you probably like Black N Beauty, as well.

5-Ribo Bobo is one of the few horses in this race that seems to be up against it although there are probably a couple of reasons why someone could give him a second look.  That last effort at Tampa was bad but he caused a bit of a fit early on, something he apparently hasn't done before; maybe we can put a line through that one.  His 2nd to Astrology in the Grade 3 Iroquois and his win at Calder in the Foolish Pleasure highlight his resume and suggest he's got a bit of class in him.  However, both the trainer and jockey are low percentage plays these days (Prado and Azpurua) so don't count on this one pulling the upset.  If he were to surprise the payouts will be large.

6-Leave of Absence finished 2nd in the listed Spectacular Bid Stakes at Gulfstream following a maiden score at Aqueduct in early November.  This will be his first attempt at going anything longer than six furlongs but that shouldn't bee too big of an issue given his running style.

7-Mucho Macho Man was a tough luck 2nd behind To Honor and Serve in the Remsen after clipping heels about a mile into the race.  That marked the second consecutive race he finished 2nd to the winner and it earned him a bit of a breather over the winter.  There shouldn't be a problem getting the trip in this race but there's a bit of a concern that he won't be at his best following the layoff.  If he's in Remsen form, this is a one horse race.  If he's a bit off, the door could be open for an upset.

8-Sweet Ducky ran 4th to Gourmet Dinner in the Delta Downs Jackpot in late November and then took an extended break to freshen up.  Prior to running at Delta, Sweet Ducky won back-to-back listed stakes at Monmouth, knocking off Printing Press, Curlinello and Astrology in the process.  The Garden Stake has turned up as a key race as four of the six horses to finish behind Sweet Ducky won their next start:

-3rd place Astrology came back to win the Grade 3 Iroquois and finished 2nd in the Grade 2 Kentucky Jockey Club;
-4th place Tiz Blessed won the listed Display at Woodbine at next asking;
-5th place Loving Dove won the listed/restricted Jersey Juvenile at Monmouth in his next start;
-6th place Bravo Romeo won a starter allowance on the inner at Aqueduct.

9-Dialed In ran an excellent maiden race back in early November at Churchill Downs but trainer Nick Zito has chosed a tough spot to make his three-year-old debut.  Entering the Holy Bull was partly due to the sloppy surface for last Friday's allowance race, which Zito had no intention of letting Dialed In run over.  And while he was able to avoid a tricky surface he's now faced with a tough, deep field to contend with.  One thing I do expect from Dialed In is a slightly different running style; judging by the works over the last couple of months, Zito doesn't want to see this colt spot the field eleven lengths in the future. Tough call on this colt.

This race, in my mind, comes down to the question of whether or not you think Mucho Macho Man is as good as his past two races suggest and whether or not he'll fire just as strong of a race today.    Personally, I won't invest a dime into this horse due to the presence of Coa in the irons; he's cost me enough bets this year.  I'd rather lose with another play than watch him take a horse in a great position and completely blow any chance of winning. (see Sunshine Millions Classic, Duke of Mischief).  Yes, I'm bitter.  I'm a horseplayer, it's what we do.

With Mucho Macho Man a no-play for personal reasons, I'm torn between a bunch of horses either coming in off layoffs or a horse that will try to take them wire-to-wire.  I've been a fan of Dialed In since his maiden and am looking forward to seeing him run today but I don't know that this is a great spot for his three-year-old debut.  If Leparoux can get him into the race a bit earlier, he's probably got a shot.  If he lags back again, he's probably sunk.

In the end, I think Black N Beauty will be the play, providing that his odds stay in the 4/1 to 6/1 range.  He should have a fairly easy time of it up front (unless Printing Press decides to mix it up early) and his recent effort over the track suggests he might have a fitness edge over some of these.