Champion Three-Year-Old Male: It's Usually Not This Messy

Share All sharing options for: Champion Three-Year-Old Male: It's Usually Not This Messy

Winning a leg of the Triple Crown is one of the quickest ways to get noticed in the world of horse racing. No other races on the calendar draw the attention of the racing public and industry officials like the Triple Crown. Over the last half century, a horse that wins the Kentucky Derby, Preakness, or Belmont Stakes stands high likelihood to win the Eclipse Award as Champion Three-Year-Old Male at the end of the season. However, 2011 is shaping up to be a year that falls outside of the historical norm. In fact, it is very likely that this year will mark the eighth time in the last 51 years (and the first since the year 2000) that the top three-year-old male will have not won at least one leg of the Triple Crown.

At the bottom of the post is the list of every horse to be named champion three-year-old since 1960, along with the Triple Crown race that they won (if applicable). A quick scan of the list makes it crystal clear that, for whatever reason, a win during the Triple Crown series is a huge boost to the chances of any horse. But what about the eight horses that won top 3YO honors but didn't capture on of the Triple Crown races? Well, almost every single one of them put together an overly impressive non-Triple Crown campaign, including a couple that were good enough to be named Horse of the Year.

Below is an overview of the eight horses to be named Champion Three-Year Old Male without winning at least one leg of the Triple Crown.

When you are one of the greatest race horses of all-time, you don't need a win in a Triple Crown race to cement your legacy. Kelso, a horse that would go on to be named Horse of the Year five times during his illustrious career, began his path to racing immortality during a sensational three-year-old campaign in which he won the Choice Stakes, Jerome Handicap, Discovery Handicap, Lawrence Realization Stakes, Hawthorne Gold Cup, and the Jockey Club Gold Cup.

Kauai King won both the Kentucky Derby and the Preakness in 1966, but Buckpasser was named champion three-year-old following a year where he won the Flamingo, Jockey Club Gold Cup, Arlington Classic, Woodward, Travers, Everglades, and American Derby, among others. Buckpasser missed all three Triple Crown races in 1966 after developing a quarter crack.

In 1972, the year prior to Secretariat ending the Triple Crown drought, his stablemate Riva Ridge won both the Kentucky Derby and the Belmont Stakes. But despite win two of the three Triple Crown races, Riva Ridge was not named champion three-year-old of 1972. Instead, Key to the Mint, winner of the Withers, Woodward, Derby Trial, Brooklyn Handicap, Whitney, and Travers, took home top divisional honors. He finished 3rd in Preakness and 4th in the Belmont. Key to the Mint did not race in the Kentucky Derby.

Wajima didn't run in any of the Triple Crown races in 1975 due to injuries, but upon his return to the track in June he quickly ripped off a string of impressive performances. After finishing second in the Saranac and the Dwyer, Wajima won the Marylander Handicap, the Monmouth Handicap, and the Travers. As impressive as those victories were, Wajima saved the best for last. He won the Governor Stakes at Belmont Park over a field that included Foolish Pleasure, Forego, and Ancient Title. He followed that up with another victory over Forego in the Marlboro Cup. In his final two races of his career, he finished 2nd in both the Woodward and the Jockey Club Gold Cup.

Despite his failure to notch a win in a Triple Crown race (he was 4th in the Derby and 2nd in the Belmont), Slew o'Gold turned in an impressive season in 1983 by winning the Wood Memorial, Peter Pan, Woodward, and Jockey Club Gold Cup. He finished 2nd in the Marlboro Cup.

Holy Bull did everything a three-year-old colt is supposed to do... except win a Triple Crown race. He dominated the Kentucky Derby prep races, winning the Hutcheson and Florida Derby at Gulfstream, and the Blue Grass Stakes at Keeneland. Following a disappointing 10th place finish in the Derby, Holy Bull skipped the remaining legs of the Triple Crown in a move that appeared brilliant over the latter half of the calendar. Once he returned to the track, Holy Bull won the Met Mile, Dwyer, Haskell, Travers, and Woodward on his way to winning dual honors of Champion Three-Year-Old Colt and Horse of the Year in 1994.

Although he narrowly missed out on a win in the Triple Crown series (2nd in both the Preakness and Belmont), Skip Away put together a fantastic resume of stakes wins in 1996, including the Blue Grass, Woodbine Million, Haskell, Ohio Derby, and Jockey Club Gold Cup. He would go on to win the title of Champion Older Horse in both 1997 and 1998, along with being named the 1998 Horse of the Year.

A late bloomer, Tiznow didn't break his maiden until May 31st of his three-old-year. From there, he quickly developed into a top class horse with wins in the Affirmed, Super Derby, and Goodwood, along with 2nd place finishes in both the Swaps and the Pacific Classic. Tiznow capped off his brilliant three-year-old season by winning the Breeders' Cup Classic over Giant's Causeway (IRE) at Churchill Downs.

The eight horses profiled above include some of the greatest names in the sport over the last 50 years, and some names that you probably forgot about. But what strikes me as most compelling is the fact that we are probably going to add the name Caleb's Posse to that list, a horse that is not in any way a Classic horse. I'm not sure whether that's interesting or just a natural result of the evolution of the American thoroughbred over the last several decades.

The likely 2011 Champion 3YO is essentially a miler/sprinter, which in a lot of ways makes sense when you consider that the bulk of races in this country are geared towards six to nine furlongs, and not the Classic distances. And I suppose it really shouldn't surprise us that the classiest, most consistent three-year-old was a middle distance horse when most of his rivals were spending time trying to win at distances that were beyond their abilities (or sitting on the sidelines nursing injuries). But despite the fact that Caleb's Posse has the strongest argument to be named the top three-year-old male for 2011, it's hard not to describe this crop as anything other than "thin". I suppose you could call it "highly competitive", which is true, but there seemed to be something lacking.

Below is a summary of several of this year's top three-year-olds, and the races that they won during the year.

[EDIT: Well, the mess extended right to me since I completely butchered this table and had several of these races in the wrong boxes. Should be fixed now] 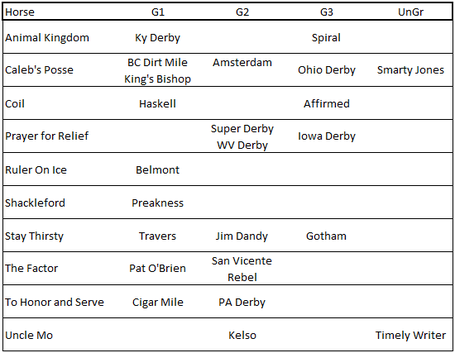 Caleb's Posse stands out for two reasons: 1) he won multiple Grade 1 races during the year (only Stay Thirsty duplicated among 3YO males, and 2) he won the most graded stakes of any 3YO male. But once you get beyond his resume, things start to get a little dicey.