Governor Beshear, after failing miserably to deliver on a critical campaign promise his last term to get gambling approved in Kentucky, appears to be pushing the topic again. I think this would be a boon to KY, not because it needs it, but because it would reassert Churchill and Keeneland as the preeminent race courses in the Midwest.

There is a huge disparity between the tracks with and without gambling in terms of total purses, not quality of racing. However, imagine if you could bump the purses at KEE and CD by 20, 30, or even 50% for the current racing days? ATJ I've included a chart from DRF.com that shows all of the purses and handles for all tracks in 2010 and then I break out the "best quality" racing, in terms of daily purses. 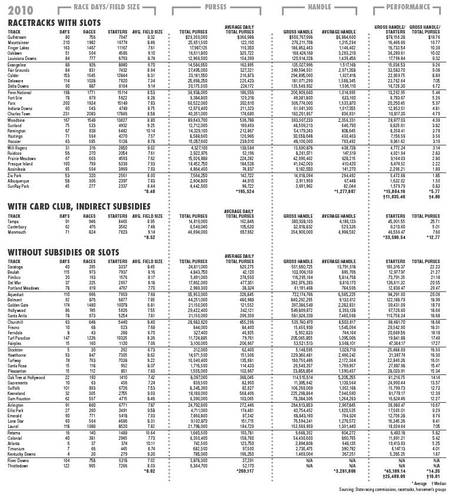 (Matt- Can you get that to copy into a spreadsheet? I can't make my cut-rate computer do it)

Rankings of the top 7 tracks by daily purses:

Santa Anita is just off this list at 399k/day. I'm also not sure if Woodbine is in Canadian dollars or not.

I think that matches up (roughly) with what we could agree on being some of the best racing in the country. Notice the relative short (boutique) meets though when talking about Saratoga, Keeneland, and Delmar. Churchill's numbers will not include any Breeder's Cup Races. It is interesting to see the differences between the Overall Purses and daily purses and how those tracks are viewed differently.

With the addition of VLTs, you could realistically see a 50% jump in purses in KY (see slide 19 here) without an increase in racing days at the two major tracks. Realistically, I would bet that you would see a major increase in racing days at Turfway and Ellis Park, a moderate increase in racing days at Kentucky Downs, and a minimal increase at CD and KEE (with these two focusing on an increase in purses for races, if given the choice by the legislature). A 50% increase shoots both major tracks to the top of the daily purse list immediately. I know Churchill has a slots parlor completely built, they just need to plug the machines in. I'm pretty sure Keeneland/The Red Mile has theirs figured out as well, but I can't be sure. So the turn around on the effectiveness of the decision is minimal to the two keystone facilities. (Considering that Keeneland's facility would not be on the Keeneland-proper grounds, I'm not really sure how that positively affects the attendance on racing days, but with KEE's focus on sales, I think that's the right choice. But again, it is not clear to me where exactly their joint VLT facility is located.)

Currently, Indiana racing and breeding is pretty reliant on the fact that Kentucky's program is less lucrative at the lower levels of racing. If you increase both racing days and daily purses, I think Indiana takes the brunt of the impact. A statistically relevant number of breeders sent mares to Indiana the last few years to foal, so the impacts are off-track as well. I would be willing to bet the breeder's incentive programs in other Midwest states would take a pretty hefty hit too if KY has a lucrative program subsidized by VLTs/slots.

I would love to see this finally get done. With all of the increases of breeders' incentives that come along with VLTs, I'd be a happy man.

But, I sincerely doubt it will ever pass. The Legislature shut it down pretty easily last time around, so this is yet another improbability, I'm sure. Gov. Beshear showed an unwillingness to really challenge the Legislature before, but maybe with his reelection he will show some more guts in doing what's best for KY thoroughbred racing (which is ultimately good for the national industry as well, which means more breeding, which means more business for KY).

All that being said, VLTs are not the saving grace of racing, we all know that. The systemic issues with the decline of popularity, an aging betting public, and a lack of serviceable national media coverage will still need to be addressed. However, I think having two of the cornerstone national tracks be able to enhance their purses, increase the quality of their programs, and attract more business/money/bettors is an overwhelmingly good thing.