Mucho Macho Man wheels back into action just three weeks after his disappointing fourth place finish in the Grade 3 Holy Bull to headline the Grade 2 Risen Start Stakes this Saturday at the Fair Grounds.  The Risen Star is the final local prep for the Louisiana Derby and carries with it a precious purse of $300,000 in graded stakes earnings.  The Risen Star is the tenth race on Saturday's Fair Grounds card and will go to post at approximately 4:46 Central time.

Saturday's Fair Grounds card will also feature the Grade 3 Rachel Alexandra (previously known as the Siverbulletday Stakes), Grade 3 Mineshaft Handicap, and the Grade 3 Fair Grounds Handicap, along with two listed stakes.  It should be a great day of racing down in the Big Easy.

Below are the entries and post positions for the Risen Star. 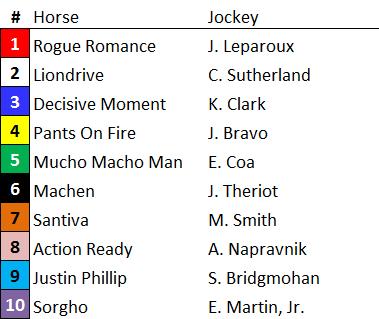 I'll have more on this race later on this week but here's a quick look at some of the names in the field:

Rougue Romance tries dirt for the second time in his career after finishing 3rd behind Uncle Mo and Boys At Tosconova in the Breeders' Cup Juvenile.

Liondrive finished 54 ½ lengths back of the winner in his last race - a statebred Allowance at the Fair Grounds.  Ouch.

Pants On Fire finished second in the G3 Lecomte behind Wilkinson.

Santiva makes his three-year-old debut after capping his juvenile season with a win in the Kentucky Jockey Club at Churchill in late November.

Machen won a much talked troubled-filled allowance race at the Fair Grounds in his last start.  The win caused a lot of people to jump on the "Machen Derby" bandwagon.