While last month's LeComte Stakes at the Fair Grounds drew a disappointing field of just five colts, the Risen Star is shaping up to be a much stronger and deeper race.  Ten three-year-old colts are slated to vie for $300,000 in valuable graded earnings, led by Rogue Romance, who was a decent 3rd place to Uncle Mo and Boys At Tosconova in the Breeders' Cup Juvenile.  The Risen Star is the tenth race on Saturday's card and will go to post at approximately 4:46 Central time.

Below is a look at the entries for the Risen Star.

1-Rogue Romance (3/1): Last weekend there were a couple of horses returning after long layoffs for trainers that sported solid numbers with those types of runners except when returning in graded stakes races (where they hadn't sent out a single winner).  We've got a similar situation in the Risen Star with Rouge Romance and Ken McPeek.  Overall, McPeek hits at a solid 17% (34-for-206, $1.64 $2 ROI) with horses coming off a layoff similar to Rogue Romance (61-180 days).  However, when you filter McPeek's runners that return in graded stakes races, he sports an 0-for-11 mark with just three finishing in the top three in the last five years.  As good as Rouge Romance looks in this spot, he just might need a race before he's ready to uncork a winning effort.

So what do we do with Rogue Romance?  He ran well in the Breeders' Cup in his first try on dirt but there's a legitimate question as to whether he'll be ready to run his best off the layoff.  Furthermore, he's been tagged as the morning line favorite by the Fair Grounds odds maker and he's sure to attract a good amount of attention at the windows.  It's a tough call.

2-Liondrive (50/1): I could spend time attempting to extol the virtues of what will surely be the longest shot on the Risen Star tote board or I could just sum up Liondrive's changes as honestly as I can: if this colt wins, the rest of the field should give up any thoughts of winning the Kentucky Derby.

3-Decisive Moment (9/2): A steadily improving colt that's only run one poor race in his career and that came over a sloppy and sealed track.  Decisive Moment has shown a good amount of speed from the gate and he ran a credible 2nd to Gourmet Dinner in the Delta Downs Jackpot last November.  His first start of 2011 was a relatively easy affair in the listed Jean Lafitte Stakes at Delta, a race that gives him a bit of foundation and fitness heading into the Risen Star.

I've got a bit of concern with how far Decisive Moment really wants to go - the mile and a sixteenth of the Risen Star is probably within his comfort range but his pedigree suggests that we might be looking at the upper end of the scale.  His sire, With Distinction, doesn't produce a whole lot of offspring that want to go a distance of ground and his dam and siblings are a combined 1-for-17 when racing at two-turns.

4-Pants On Fire (6/1): Went off at odds of 8/5 in the LeComte (2nd choice to Justin Phillip) and looked like a certain winner in mid-stretch only to lose out by a head to Wilkinson at the wire.  Pants on Fire has excellent gate speed and has already proven the ability to run well over the Fair Grounds main track, something that should be a benefit in this spot.  On the other hand, this colt had everything his own way on the front end in that last race and still couldn't seal the deal.  Considering that the pace should be a bit more contentious in this race, Pants On Fire may be fighting an uphill battle.

Three races back Pants On Fire finished 3rd behind Monzon in the Count Fleet at Aqueduct.  Monzon came back to run 5th to Brethren in the Sam F. Davis last weekend.

5-Mucho Macho Man (4/1): While I'm sure the connections weren't disappointed in finishing 4th to Dialed In last time out in the Holy Bull, Mucho Macho Man didn't run a bad race; he just wasn't ready to fire his best.  Now that he's got that first race under his belt he should be much better...and improvement from the Holy Bull should put him near the top of the field for this one.  There's going to be plenty of company up front and he'll need to stay relaxed early if he's to have enough in the tank for the long Fair Grounds stretch.

6-Machen (6/1): The "buzz" horse for this race is clearly Machen, a tough trip winner last time out against allowances horses at the Fair Grounds.  He'll get a much sterner test in this spot and it would probably help if he could avoid the trip note of "off slow" for the first time in his career.

The word that kept coming to mind as I watched the replay of Machen's allowance win last month was "power"; despite the slow break and attempts to crawl up the back of the leaders within the first quarter mile, this colt displayed an abundance of pure power on the track.  And while it's tough to get an accurate sense of how good a horse is based on a maiden or allowance victory (none of the horses he defeated in his last are anything close to Derby-types), I don't think it will be a shock if this colt puts up a big performance in the Risen Star.

Santiva won the Grade 2 Kentucky Jockey Club last time out at Churchill Downs over Astrology and Major Gain and he finished 2nd in the Grade 1 Breeders' Futurity at Keeneland last fall; both of those performances give him a nice base of graded earnings to work off of this spring.

8-Action Ready (12/1): This colt likes to run up front, a position that will likely find him with a whole lotta' company on Saturday.  He finished 3rd in the LeComte last time out but there were only five horses in the field and he was a good five non-threatening lengths behind the winners at the wire.  This race will be tougher than the LeComte and it's difficult to envision him with a serious chance to win.

9-Justin Phillip (8/1): Sent off as the even money favorite in the LeComte, this son of First Samurai finished last of the field of five, over fourteen lengths behind Wilkinson.  I tried to find an excuse as to why Justin Phillip ran so poor but I just can't.  If anything, Justin Phillip was horrendously overbet in the LeComte.  As the trip notes indicate, he didn't break particularly well and he was a little wide coming off the far turn but that doesn't explain why he just threw in the towel in the stretch.  Furthermore, considering his pedigree, I've got concerns that he'll be at his best at two-turns.

10-Sorgho (30/1): Most of what I wrote for Liondrive applies to the other super longshot in this field, Sorgho.  This son of Storm Cat broke his maiden last time out at Sam Houston going a mile and 70 on the main track.  Prior to his last race, he struggled in a couple of maiden special events on the turf at the Fair Grounds.

This race appears incredibly wide open to me with so many of these colts possessing a lot of things to both like and dislike in terms of their chances to win.  I love the way Rogue Romance stepped up and ran a solid race the first time on dirt, but I'm leery of the layoff.  Machen impressed me with his last win, but he's making a big step up in class after facing nothing in that last race.  Mucho Macho Man appears to me to be the most likely winner, but I've got a thing about betting on any Coa horses these days.  I think Pants On Fire is over his head and I really don't know what to expect from Santiva and Decisive Moment.

So where does that leave me?

I'm doubtful that the odds will stay as generous as the morning line, but if Machen is at 5/1 or better at post time, I'll go in his direction for the win.  Machen's got races under his belt this spring, which I believe will give him a bit of a fitness edge over the layoff horses.  Additionally, he just looks like a horse that's sitting on a big race.

I'll go with Machen for the win and a quadruple "M" exacta - Machen over Mucho Macho Man. 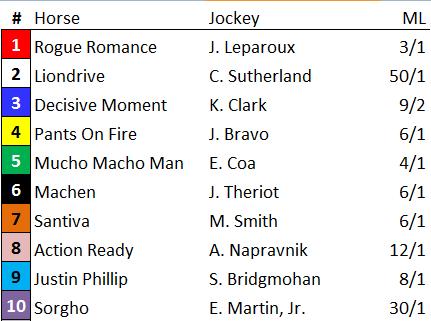