Saturday is shaping up for a nice day of stakes action across the country.  While the Donn is the centerpiece of the East Coast action, Twirling Candy will take on seven other rivals in the Grade 2 Strub Stakes out in Santa Anita. 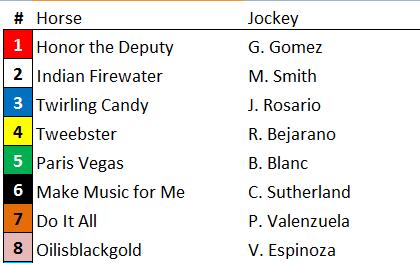 While his stablemate, Sidney's Candy, is likely to campaign primarily on grass this season, Twirling Candy appears to be slated for the older horse division on the main track.  He won the first two starts of his career on the synthetic surface at Hollywood Park, then proceeded to win back-to-back stakes race on the lawn, including the Del Mar Derby.  The only blemish on his six race record was his fourth place finish in last fall's Goodwood at Oak Tree Hollywood, a race where he was sent off as the 7/10 favorite.  He got his first taste of conventional dirt when winning the Grade 1 Malibu Stakes over Smiling Tiger and Caracortado and a follow-up win in the Strub would stamp Twirling Candy as one of the top older horses in the country.

The tote board on Saturday will most likely feature low odds on Twirling Candy and for good reason - he appears to standout in this field.

Below is a rundown of the other contenders in the Sturb:

1-Honor the Deputy picked up a nice win in an OC/N2X event last time out and will make his first start against graded company in this race.  He ships in from Laurel in a first start for new trainer Jerry Hollendorfer and will get Garrett Gomez in the irons.  The connections are solid and Hollendorfer is good with new trainees (87-for-277, 31% Win, $1.86 ROI over the last five years) but this is a big test for this gelding, especially since he prefers to do his running off-the-pace.

2-Indian Firewater is the only graded stakes winner in the field other than Twirling Candy.  This Bob Baffert trainee has proven to be a solid horse in the allowance and listed stakes ranks at Hollywood, Oak Tree, Del Mar and Santa Anita this past year and a half and he possess that trademark Baffert gate speed that's critical to winning at Santa Anita right now.  Two races back, Indian Firewater finished second over seven lengths behind Sidney's Candy in the Grade 3 Sir Beaufort (originally scheduled for the turf course).

Indian Firewater has the gate speed to keep himself in the mix in the early stages but he's giving away a bunch of class to the favorite.

4-Tweebster finished a nose behind Indian Firewater in the Grade 2 San Fernando in his last start, the first race over dirt in his career.  He's primarily displayed a speed/stalking running style in his past races and he stayed relatively true to that form in his first dirt try.  He probably doesn't have the turn of foot to grab the lead from either Indian Firewater or Twirling Candy, but he should be able to find a good stalking position early on.

Tweebster is also trained by Bob Baffert, who is hitting at an unreal 39% during the current Santa Anita meet.

5-Paris Vegas might possibly be the longest shot in the field and seems really out of his element in this spot.  His last race was the aforementioned Grade 2 San Fernando where he finished well back of both Indian Firewater and Tweebster.  Prior to that he ran in the Malibu and never got within sniffing distance of Twirling Candy.

Paris Vegas doesn't possess much in the way of early speed making him a tough horse to back for win honors given the way Santa Anita has played this winter.

6-Make Music for Me was part of last year's Triple Crown series, running in both the Kentucky Derby (4th) and the Belmont Stakes (10th).  Unfortunately for Make Music for Me, he has only mustered an N1X allowance win since those races and ran a very poor race in the San Fernando (7th of 8).  This colt has never shown much early speed throughout his career and would appear to have his work cut out for him in this spot.

If there is a horse that has the potential to spring a bit of a surprise, I think 6-Do It All might be the one.  Like many in this field, Do It All ran his last race in the San Fernando, finishing 3rd behind Indian Firewater and Tweebster.  However, this will only be Do It All's fifth start of his career, suggesting that this colt might have some additional room to grow.  He was bit of a late developer already (making his racing debut as a 3YO at Saratoga last August) and Darley paid $900k for this guy, so somebody thinks he's got some talent. Whether that ever materializes on the track remains to be seen.

If Eoin Harty can get this colt to move forward from that San Fernando effort it's not crazy to think he could get into the mix at the end.  If, however, he's only able to duplicate that last effort, he will probably finish well back of the winner.

7-Oilisblackgold won a maiden race at Fairplex last September, the one and only time he's found his way to the winner's circle.  He would have to take a major step forward to win this race.