Share All sharing options for: The Lewis Stakes and El Camino Real Derby fight for entries

Three Derby prep races are scheduled for this Saturday, including two in California: the Grade 2 Robert B. Lewis Stakes at Santa Anita and the Grade 3 El Camino Real Derby at Golden Gate Fields.  After looking at the entires drawn for each race this afternoon, one wonders if it would have been better to just combine the two races into one event.

The Robert Lewis Stakes drew eight entries while the El Camino Real drew seven (entries below the jump).  Two of the horses in the Lewis (Comma to the Top and Anthony's Cross) are also entered in the El Camino Real, meaning one (or both) of these races is going to see a defection.

Horses entered in multiple races for the same day or weekend is nothing new - trainers are looking for the easiest spots for their horses to run in order to have the best chance at picking up valuable graded earnings.  But when two tracks in the same state are both running stakes races restricted to three-year-old on the same day (and with relatively similar purses and the exact same distance), the only thing likely to happen is that both races will come up with less than full fields.

While Santa Anita and Golden Gate are separated by almost 350 miles, doesn't it seem a bit redundant that the only tracks on the west coast that put forth a graded program for three-year-old males are running races on the same weekend?

A similar situation to this occurred last summer when several East Coast tracks ran two-turn graded stakes races for older fillies right on top of each other.  Predictably, all of them ended up with fairly short fields.

There's a lot of talk about the need for less racing and the best way to set up the sport nationally in order to garner the most interest.  Part of that conversation has centered on the way the sport schedules its biggest days, something the Lewis and the El Camino Real illustrate quite well. 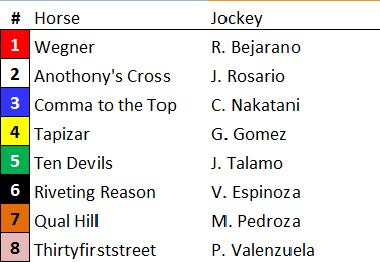 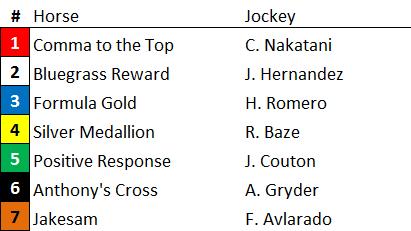