Kentucky Derby vs. 2,000 Guineas: Which race will feature the heavier favorite?

Share All sharing options for: Kentucky Derby vs. 2,000 Guineas: Which race will feature the heavier favorite?

At the conclusion of the first pool of the official Kentucky Derby Future Wager, there were murmurings surrounding the odds people were willing to play on Uncle Mo, the de facto favorite in late February.  Odds on the juvenile champion to win the Derby have hovered right around 7/2 for a while now, a fairly low number for a colt that has yet to make a start as a three-year-old.  But if you think those odds are low, cast your eyes across the Atlantic at the ante-post wagering for the English 2,000 Guineas.

The Stan James 2,000 Guineas is the first classic on the British flat racing calendar and will take place on Saturday, April 30th at historic Newmarket Racecourse.  Frankel, the British juvenile champion, is listed anywhere from 4/5 to 5/4 by English bookmakers to win the Guineas.  Not only has Frankel not raced yet as a three-year-old, but it's doubtful that he'll run in any race prior to his start in the Guineas.

If you look at the results of the 2,000 Guineas in previous years you'll notice that the winner is often a colt that with little to no prep races.  Compare that to the Kentucky Derby, a race where it's unheard of for a horse to come in without a single start during their three-year-old year.

Unlike most of the racing in the North America, flat racing in Europe takes the winter months off (at least in terms of turf racing, some racing takes place over standard or synthetic tracks, but the high level racing slows down after Arc weekend.)  So while the top three-year-olds in North America are back racing competitively in February and March, their counterparts in Europe are conditioning, but not racing.  Only once in the last five years has a horse started a race prior the Guineas and gone on to win (Makfi - 2010).

Below is a summary of the recent winners of the 2,000 Guineas and their preparation:

Unless Uncle Mo were to completely fall apart in his two Derby preps, he's almost a shoe-in to roll into Louisville as the strong betting favorite.  The Timely Writer will amount to little more than a glorified workout, while the Wood will be his one, true pre-Derby test.  A solid race at Aqueduct, whether it's a winning one or a well-placed 2nd or 3rd, should be enough to maintain his favorite status.

Frankel is unlikely to see much change in his odds unless some kind of health problems are brought to light, or some other colt is able to generate a "buzz' (an unlikely proposition).

So which of the two colts is likely to be the heaviest favorite come late April/early May?  The smart money says Frankel will see a greater percentage of the cash.  Big Brown, who was considered a solid favorite in recent Derby history, went off at a relatively healthy 5/2.  I could see Uncle Mo bet down to that level, but it's tough to see him at anything lower than those odds unless he turns in to the second coming of Secretariat in the Wood Memorial.  Frankel, on the other hand, should easily match the odds of George Washington and New Approach, two highly regarded Guineas favorites, and could go of at odds even lower than that.

Below is a look at the betting favorites in the 2,000 Guineas and the Kentucky Derby since 2006, and how those horses have fared in each race.

You can find the current odds for this year's 2,000 Guineas below. 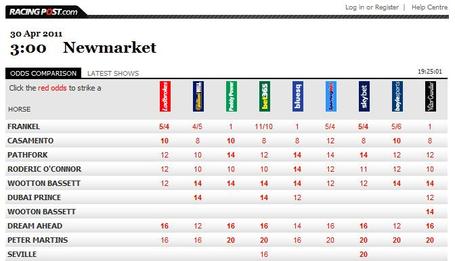