An Evening at Royal Windsor Racecourse

Share All sharing options for: An Evening at Royal Windsor Racecourse

This post is the first in a series of posts that will chronicle the experiences of an American horseplayer (your truly) stepping into the land of the unfamiliar, thoroughbred racing in the U.K.  Over the next two weeks I'll be attending race meetings at such famous courses as Epsom Downs, Ascot and Newmarket.  Tonight, my journey began with a trip to Royal Windsor for one of their Monday night meetings.

Royal Windsor Racecourse is located just northeast of Windsor Castle along the shores of the River Thames, roughly 22 miles from central London.  From the second you walk through the gates the course has a distinct feel to it, an almost country fair-like atmosphere, a throw-back to a forgotten time of racing.  The crowd is decisively different from that at most tracks in the U.S.; most patrons are in their 20s, 30s and 40s and are dressed for a night out rather than just a trip to the track.  A boat ride along the river from the train station to the course features a bar and large group of festive fans ready for a fantastic atmosphere of evening racing.

I imagine if racing officials from the U.S. could experience the environment at Royal Windsor Racecourse they would without a doubt desire to replicate it at our tracks, especially the smaller ones, across the country.

While it probably would have been best to begin the evening with a race containing a field of horses with some discernable form, tonight's card at Windsor began with a 14-horse field of two-year-old maidens, 11 of which were first-time-starters.  Sounded like Keeneland to me.

Upon opening my Racing Post to Windsor this afternoon on the train, I immediately turned towards the section summarizing the trainer data as I figured the first task in attempting to handicap this track would involve understanding which barns win at a high percentage.  Only a quick glance was required to see that trainer Richard Hannon has been one of the top conditioners at the course since 2007, and has saddled the most juvenile winners during that time (36-for-212, 17%).  A second glance at the numbers told me that while Hannon wins frequently at Windsor, a flat £1 bet on all of his runners at the course since 2007 (476) would have produced a flat loss of -£61.45.  Like many of the winning trainers in the U.S., the odds tend not to be high enough on popular trainers to produce long-term profits.

Hannon sent two juveniles to the gate in the first race, Mrs Mop (IRE) (7/1) and Best Terms (GB) (7/4), with Best Terms validating his favorite's status with an easy two length win in the five furlong opener.   I had a small play on Best Terms (because I had to start off by playing the chalk!) and was rewarded with a modest gain.  At least I started in the right direction.

The second race on the evening seemed a bit less confusing with a more manageable field of eight going to post, all of which had done some running previously in their career.  Many of the runners had never won over a turf course and it was a bit difficult to get a handle on which were the true contenders and which had little chance at success.

Brilliant Barca faded in the final furlong of his last effort (his first try on turf) but I thought he might be willing to stay on a bit better this time after that initial test.  The favorite, Pretty Diamond (at a brutal 4/5), definitely looked the part and was coming in off a win at Beverly just a week and a half earlier.  I didn't travel several thousand miles to bet a 4/5 horse (at least not two races in a row) so I threw a few pounds on Brillant Barca at 9/1 and watched her run up the course.  Now things were starting to seem more like home.

Another race with a huge field (this one a 16-horse handicap at almost a mile and a half), the third race on the card was the first where I found a horse on the form that really caught my eye with a price likely to produce decent returns.  Saborido hadn't run since last fall at Newmarket, but with his general preference for more ground I figured that a slight cut in distance in the first test after a freshening could be a good fit.  The trainer and jock were middle of the table at Windsor but the 14/1 price and the big field was too enticing for me; I pushed a few pounds were pushed towards the American-bred as they loaded into the gate.

The big field and the wide-open nature of the race produced big numbers on the tote board but denied me a day-proving score when Saborido failed to mount a serious run in the stretch and could only muster 5th, two and a half lengths behind the 7/1 winner, New Code.  The top three were rounded out by 14/1 Advisor and 22/1 Meglio Ancora.

I hadn't come up with a big windfall but not many others at the course did either.

Hey, look at that: a sprint race!  Okay, the field full of firsters and the mile-and-a-half races were foreign to me, but a sprint race has got to be right up an American player's alley, right? That sounded good in theory.

In the fourth race of the evening I ended up on Rum King (17/2), a four-year-old American-bred colt that sported good connections (Richard Hannon and Richard Hughes) along with solid ability at the distance on previous occasions (two wins and a place in six starts).  The Racing Post had rated him highly and the paddock handicapper threw additional accolades in his direction; this was my horse...and at nice odds.  Sadly, instead of glory I got the worst performance of any horse I picked on the night - 12th of 14 at the wire...ouch.

I suppose I shouldn't have been surprised at my poor performance in this race considering I can't pick turf sprint winners to save my life in the U.S..  Why would things change in England?

(A side note: one of the trainers in this race was named Milton Bradley; being a Seattle Mariners fan I should have been required to put a bet down on his entry just for the hell of it...and then watch the horse get DQ'd.)

Another maiden race, although this one sported a more manageable field of nine horses.  Purification looked loads the best in every conceivable angle and was taking the cash from the majority in attendance.  With odds hovering around 7/4 on the favorite I tried to find some value elsewhere, though I knew this was likely to be a futile effort given the strong form of the betting choice.

Dressing Room, another American-bred (there seemed to be about two or three in every race), had run twice in 2011 and fared decently at each asking.  He was clearly a cut below Purification, but he sat at 5/1 and one of his previous solid runs this spring came over the Windsor course...and I love a good horse-for-course angle.  A few pounds toward Dressing Room, a quick purchase of another pint to wash away my anticipated sorrows, and it was off to the rail to see if I would be lucky enough find an upset.

Whether the racing is done in the U.S. or the U.K., it's generally easy to spot a horse during a race that is simply toying with the rest of the field.  And that's what happened in the fifth at Windsor tonight - Purification toyed with them.

With about five furlongs left in the race and Purification leading the field while sitting on a half-length lead over Dressing Room, jockey William Buick gave the favorite a very early tap of the stick.  It was the kind of move that at first makes you think the horse was falling off stride.  But instead of signaling a tiring horse, this stick action signaled a horse that was ready to put away the field well-before the wire.  The rest of the field had an option: keep pace or pack it in.  In the end, they packed it in.  By the time Purification was a furlong from the wire he had turned the race into a laugher, going on to win by an easy three lengths (it could have been much more).

My upset play of Dressing Room could only manage 3rd.

The sixth and final race on the night continued the theme at Windsor - big fields and competitive races.  Many players in North America, including myself, complain of the lack of big fields and competitive races, and rightfully so - there is more money to be made (generally) when you're betting a field of 12 than six.  At the same time, handicapping a large field (especially when doing so at a track that is completely foreign to you) is a huge challenge.  It's hard enough to pick winners in six horse fields.

I went with Holy Man in the finale, the 9/2 second choice that had won his debut effort at Lingfield on the all-weather surface last October.  I wasn't sure about the surface switch from synthetic to turf, but he was rated well by the Racing Post and I was quickly running out of ideas (and beer).  Soweto Star, a 12/1 shot that ran earlier this month at Windsor, proved the best of the field and closed out the evening with another decent price.

The last race of the night turned into a bit of a mess as the two horses leading the pack ended up doing a U-turn about half-way through the race when No Larking spooked and bolted outwards, taking Royal Opera with him.  Neither horse was injured but both lost any chance to finish within sight of the winner.

At the end of the day I had one winner from six (and the one was chalk city), but a day full of education and experience - that should count for something...even if it doesn't pay the bills. 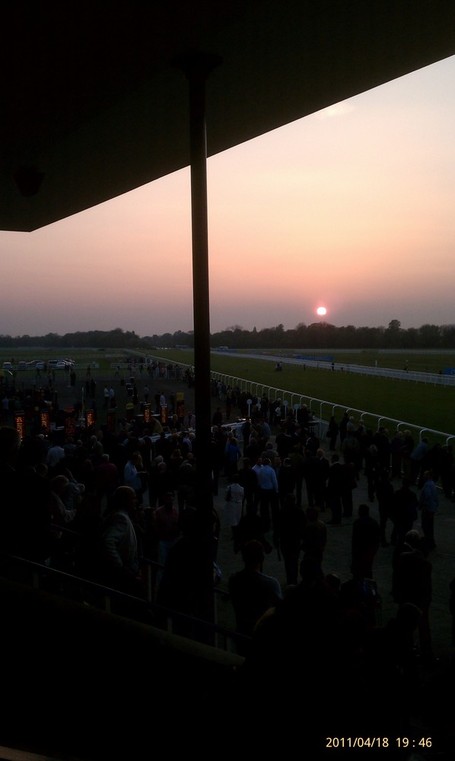 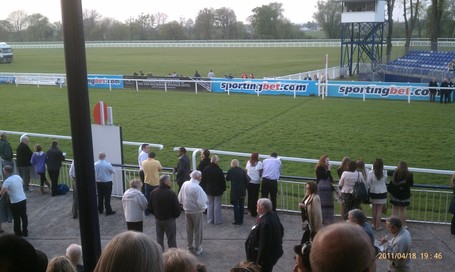